Sometimes you find something exciting, but in some ways it is still lost. For some reason, the found item is still a mystery. That recently happened to us. The natural history collections of the Ohio Historical Society have a huge number of items on long-term loan to the Museum of Biological Diversity at the Ohio State University. These were left behind on loan when OHS moved from campus in 1970 to our current building on 17th Avenue and I-71. These were left on loan to provide materials for student and faculty at OSU to study. We recently had need to inventory and re-box the Pleistocene mammal bones that are part of this loan at OSU. In the process of the inventory, I opened a large box labeled Elk antlers from Silver Lake, near Belle Fontaine, Ohio. It contained 7 separate antlers representing at least four individual elk. This was the first problem, as the only record we could find was that in August of 1960 two nearly complete elk skeletons were recovered from Silver Lake, part of YMCA Camp Wilson near Bellefontaine in Logan County. While we are still searching, so far we have not been able to find any complete bone list from those finds. Several later references refer back to this find, but the only current reference is a half-page article by OHS staff member Robert M. Goslin, published in the July 1961 volume of the Ohio Archaeologist, which briefly mentions two nearly complete elk skeletons in a fine state of preservation and then goes on to illustrate and describe several flint flakes found embedded in one rib. Obviously, one does not acquire 7 antlers from two elk so clearly sometime after 1960 someone added additional antlers to this box. Only one antler had a number on it. That number was 17951 a number that does not match any record we can find. Problems in older collections with failure to place collection numbers on specimens and to maintain detailed records arise time and time again. It is a serious problem and very frustrating to museum curators. It is not just at OHS, but it is a problem I have heard several museum curators across the country complain about. Hopefully, today we do a better job with this but that does not solve the old problem.

A couple of the antlers were very aged and weathered and were gradually falling apart. They were all wedged in together in this huge box, so for lack of time, we decided to try and examine them the best we could without removing them from the box at this time. Removing them and conserving them will require a significant effort that we did not have time for in the midst of that inventory. However, while examining the box contents as best we could without removing the antlers, I discovered lying on the bottom of the box a separate bone. When I carefully pulled it out, I must have gasped or something. I recognized it as a metatarsal (now determined to be a left metatarsal) from an animal called Cervalces scotti, or the Elk-moose, or sometimes Stag-moose. Having just recently completed a scientific paper on another Ohio elk-moose specimen from near Chippewa Lake in Medina County, I was shocked to find this bone.  (See my Blog from August 25, 2008 on the Chippewa Lake specimen.) 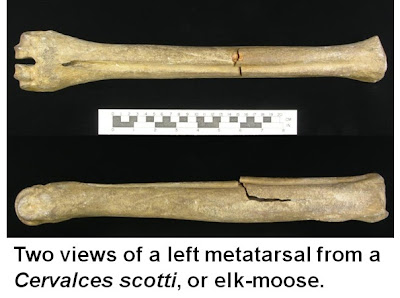 There are currently only 11 other records of elk-moose from Ohio and most of those are only one to three bones. OHS has four Cervalces, two of which (the Rodabaugh, N9073 and the Chippewa Lake, N9124) are represented by numerous bones.

This bone represents the 12th find of an elk-moose from Ohios Pleistocene. But where did it come from? Like most of the antlers in the box, there were no catalog numbers on the bone, and no sheet of information about the bone (or the antlers) lying inside the box. Did it come from Silver Lake, along with some of the modern elk bones, and no one made mention of it? It could have come from anyplace. Actually, we have no proof at this point that it came from Ohio. Since virtually all of the natural history and archaeology departments collection efforts are in Ohio, it is most likely from Ohio.

How can we ever find out where this bone from a rare, extinct Ohio mammal came from? We have been scouring literature sources and OHS archives to try and find a reference to it. We have looked in field notes and correspondence from OHS staff members Robert Goslin and Raymond Baby. So far, the only archived reference we found was a letter from Ray Baby (Curator of Archaeology) to the management staff of Camp Wilson, dated August 22, 1960 noting the original find by boys at the camp and requesting permission for further exploration of the site by OHS staff.

We will keep looking, of course, and there are a few more boxes of potentially promising archives from Robert Goslin that we still need to examine. But what if we can find no paper trail that we can link to this bone?

Unless somebody finds a good link, the bone will be cataloged, with notes about its dubious connection with Silver Lake, and then relegated to a spot in collections and to become somewhat obscure. Perhaps someday someone will find a chemical test to link the bone to a specific body of water, or a genetic test or some other test that might reveal a connection. Our ability to test bones today for radiocarbon dating and genetic material was hardly imagined 100 or even 50 years ago and who knows what new test might yet be developed sometime in the future. Maybe ten, or twenty or fifty years hence, our mystery will be solved. In the meantime that is part of the value of carefully preserving rare artifacts from Ohios distant past.