In their recent paper in the Journal of Anthropological Archaeology, archaeologists Sarah Sherwood and Tristram Kidder describe the builders of the mounds of eastern North America as the “DaVincis of dirt.” I summarized their reasons for making that comparison in my column in the Columbus Dispatch, which you can read by following the link at the end of this post. The examples used by Sherwood and Kidder come almost exclusively from sites outside of Ohio, so I thought it would be worthwhile to provide some additional examples supporting their conclusions from this mound-rich region. Sherwood and Kidder observe that unpublished Depression-era excavation profiles demonstrate a level of complexity that usually was not mentioned in the reports. Richard Morgan, Ohio Historical Society Curator of Archaeology in the 1940s, produced a remarkable profile of his excavation of one of the embankments at the Fort Ancient Earthworks that clearly shows the complexity of its internal stratigraphy, yet in his monograph on the site he states merely that the walls “are composed primarily of earth.” 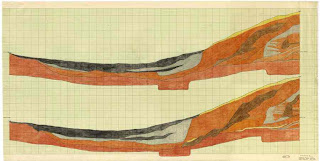 The stratigraphy revealed in the walls of Newark’s Great Circle is less complicated than what Morgan observed at Fort Ancient, but it’s not just a pile of dirt! 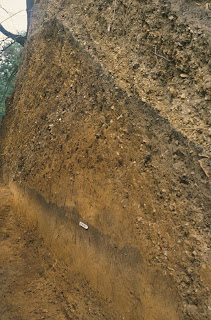 DeeAnne Wymer of Bloomsburg University, and I co-directed an excavation through the Great Circle’s embankment in 1992. As you may be able to see from the picture, our trench revealed that the wall was composed of two distinctly different kinds of soil. The outer portion of the wall is made of dark brown earth, presumably obtained from the organic-rich upper layers of the soil. The inner portion of the wall is made from bright yellow-brown earth obtained from much deeper soil layers. We don’t know whether these colors were part of the original architectural presentation of the earthworks or if vegetation was allowed to grow over them. Regardless, the use of these particular types of soil likely fulfilled an important ritual purpose.

Both the Fort Ancient and Great Circle earthworks are examples of Hopewell culture architecture, built between 100 B.C. and A.D. 400. The Alligator Mound is an effigy mound built during the Late Prehistoric period (A.D. 1000 1650). I co-directed a limited investigation of this mound in 1999 with Tod Frolking, a soil scientist from Denison University. 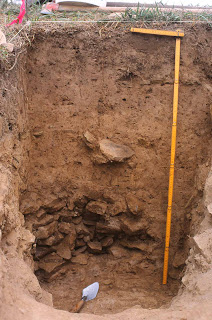 Our trench revealed a small mound of loosely piled sandstone cobbles at the base of the mound covered with an homogenous clay-rich silt. This material may have been poured over the stone mound as a thick slurry, because the material appeared to have sealed the small stone pile preventing sediment particles from filtering into the cracks and crevices between the stones. Sandstone cobble facing was added to the mound at two different times during its construction. Clearly, the builders of these mounds used a variety of engineering techniques to create dramatic and enduring earthen monuments that qualify as works of art.

Here’s a link to my column in the Dispatch with more information about the “DaVincis of Dirt”: http://www.dispatch.com/live/content/science/stories/2011/05/01/ohios-mounds-are-works-of-art.html?sid=101