In the Spring 2013 issue of the Midcontinental Journal of Archaeology, already featured in this blog for the article on Newark archaeoastronomy, Chris Carr, an archaeologist at Arizona State University, and Robert McCord, Curator of Paleontology at the Arizona Museum of Natural History, review six Hopewell representations of animals that appear to be chimerical and consider what different animal species are included in the mash-ups. One of the six creature effigies studied by Carr and McCord is a crocodile, caiman/alligator and possible snake mash-up from the collections of the Ohio Historical Society. It was found in Esch Mound 1 in Erie County, Ohio. 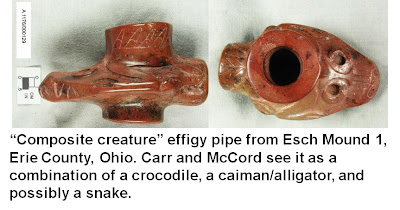 In the text of the paper, Carr and McCord write that “Almost all the creature’s traits are crocodilian, but some characterize the caiman or alligator while others indicated a crocodile. General crocodilian features include the creature’s prominent teeth, plantigrade legs, dorsal ridge-spines or ‘osteoderms‘ on its back, and chevrons for tail spines. The U-shaped snout resembles that of a caiman or alligator, and the ridges around the eyes recall specifically those of a spectacled caiman, Caiman crocodilus, whereas the prominent teeth suggest a crocodile. The creature’s head shape is closer to that of a snake than a crocodilian.” Carr and McCord summarize their conclusions in the paper’s Abstract: “Detailed zoological identification of the component animals documents that all were associated with the underwater-underground realms of historic Woodland and Plains Indian cosmoses, in contrast to some later Mississippian and Historic period composite creatures with both sky and water-earth associations. However, strong continuities are found in the kinds of underwater-underground creatures known to historic Woodland-Plains and prehistoric Ohio Hopewellian Indians. A survey of historic Woodland and Plains knowledge about underwater-underground creatures sheds light on both their helpful and harmful roles and the very wide spectrum of domains of life they affected, in contrast to some current Woodland ethnographic, ethnohistorical, and archaeological lines of interpretation that caricature the creatures as harmful and gloss over purposes of Ohio and Illinois ceremonialism other than world renewal.” Brad Lepper