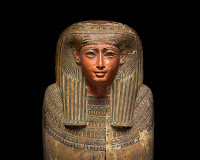 The Ohio Historical Society is partnering with The Ohio State University Wexner Medical Center to apply the latest medical technology to uncover the story of Nesykhonsupashery, a young woman who lived and died in ancient Egypt during the reign of the Ptolemys between 300 – 200 B.C.

Advanced medical imaging may reveal how she died and will look for untold aspects of the mummys life, including details relating to her health, diet, and physical activities she may have engaged in on a regular basis. Ohio State radiologists will scan the mummy using Ohio State Medical Centers new Flash CT scanner, the most advanced scanner available in central Ohio, capable of imaging even the tiniest anatomic detail. 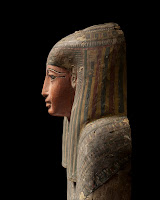 The coffin was discovered by the Metropolitan Museum of Art Egyptologist Herbert E. Winlock during 1912-1913 excavations. The Egyptian government later presented it to Dr. J. Morton Howell, the first United States ambassador to Egypt and a native of Ohio, upon his retirement. Howell donated it to the Ohio Historical Society in 1926 where it has been on display ever since.

Nesy, as she is affectionately called, was a “Mistress of the House” and a daughter of a guardian of the Temple of Amon at Karnak. Upon her death, she was prepared for burial and laid to rest at Deir el Bahari, the cemetery of ancient Thebes. She has become one of the Ohio Historical Society’s most popular exhibits, but until now little has been known of her life beyond the bare facts inscribed upon her coffin.

It is the Ohio Historical Society’s hope that this new information will transform the mummy from a curiosity to a testament to what can be learned of the life of a young woman of Egypt who lived at a time when ancient Ohioans were building the Miamisburg Mound and carving the Adena Effigy Pipe. Special thanks go to Schoedinger Funeral and Cremation Services for providing transportation.