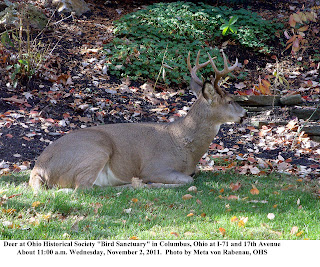 A few weeks ago I did a blog about snakes, deer mice and hawks that show up around our collections facility a little north of the center of Columbus. Those animals are easy to find in many areas: the deer mice and northern brown snakes use so little space, and the hawks are easily mobile and wander far and wide. In early November, we had a much more surprising discovery at the Ohio Historical Center. An eight-point buck White-tailed Deer visited our Bird Sanctuary.

While no one is certain when he arrived, nor when he left, he was seen by dozens of staff and visitors for at least an hour around the middle of the day. Sometimes he was bedded down, twenty feet outside our windows. Sometimes he was browsing food in the same area. Our building (800 East 17th Avenue) is surrounded by the State Fair grounds, the Crew Stadium, I-71, a major railroad line and lots of residential and commercial development. The closest wild area of any size is along the Olentangy River, 1.8 miles due west as the crow flies. While bucks are known to wander looking for does during November, this buck had to travel quite a ways through hostile territory to find our Bird Sanctuary. (Maybe we need to re-name that area!) 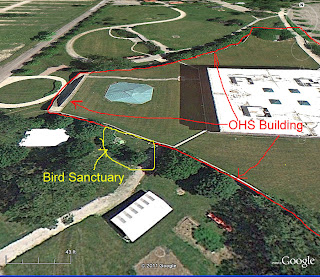 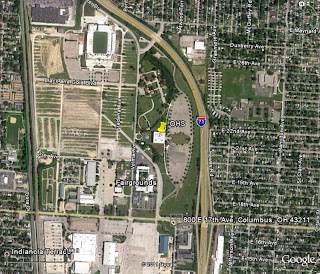 Here are a couple of views from Google Earth of just how developed it is around our building. A design of our Bird Sanctuary shows this area is only about 80 feet x 40 feet or about 3200 square feet, which equals less than 1/10th of an acre. [The deer in the photo was laying down just to the left of the small pond.] 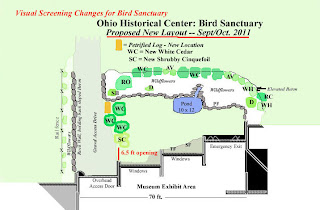 Obviously our Bird Sanctuary cannot support a White-tailed Deer other than as a temporary refuge during its travels. Deer typically travel in about one square mile of land. But just the fact that it found and briefly used this habitat is rather amazing. Imagine what would happen if half of the residents of Columbus landscaped their yards for wildlife!

Deer have a very interesting history in Ohio. Before European settlement, when Ohio was 95% forested, deer were not super abundant. They are edge animals, not animals of the deep primeval forest. As the forests were cleared, deer quickly expanded their populations around those clearings. In 1800 an observer in Tuscarawas County reported that it was a poor hunter who at the end of an hour could not bring down a fine buck or more palatable doe or fawn. [The emphasis is mine.] A few years later during the Great Hinckley Hunt of 1818, 300 deer were shot in a single day. In early Ohio, there were no game laws, other than bounties on predators. In 1857 the State Legislature passed the first hunting restrictions, allowing deer hunting for only 140 days instead of all year. Notably, there were still no bag limits; you could shoot as many as you were able during those four-plus months. By 1911 deer were officially extirpated from Ohio. Some sources say for practical reasons Ohio had no deer from 1904 to 1923. Can we today imagine not one single deer in Ohio? The official Division of Wildlife estimate is that entering this falls hunting season we have 725,000 deer in Ohio. In a recent year, there were 24,600 deer/car accidents. Lots of deer! Some say too many.

How did the changes in deer numbers happen? Deer introductions were begun by the Division of Wildlife in what is today Shawnee State Forest in 1922. Being prolific, they multiplied and spread. Scientific game management controlled the harvest to allow the deer population to expand. In 1988, the White-tailed Deer was named the official State Mammal of Ohio. Today, game laws allow hunters (depending on the region of the state) to harvest up to six deer each though few hunters take anywhere near that number. Deer are highly adaptable, are known to eat at least 1,000 different types of plants, and have learned to thrive in areas where they are protected and even in areas where they are hunted.

But let us remember that not all wild animals (or plants) are as adaptable as deer. Many require highly localized and strictly specialized habitats. Green Salamanders live only in crevices and caves on certain types of cliffs in southern Ohio. Indiana Bats require loose bark under old trees to roost during the summer, and caves to hibernate in during the winter. The Elfin Skimmer dragonfly lives in sedge meadow wetlands in only three isolated places in the state and we dont even know why they do not live in others of the rare wetlands remaining in the state. Fortunately, we have people who research the requirements of rare animals, and a few place such as State Nature Preserves where some of that specialized habitat is preserved. Seeing a wild White-tailed Deer is exciting and a special opportunity even if they are much more common today than just a few decades ago. But seeing some of the truly rare wildlife that our state still harbors is a much greater thrill and one which hopefully will continue to remain possible if we value and protect our special wild areas.