The September/October issue of Archaeology magazine includes a mention of the Newark Earthworks in the short feature “Off the Grid.” This feature spotlights the favorite site of a particular archaeologist especially a site that the archaeologist thinks might be a bit underappreciated. I was chosen to give my favorite for this issue and a writer for the magazine talked to me at length. Only a short “sound bite” appears in the article, however, so I thought I’d share a few of the questions I was asked in the course of the interview and my answers. 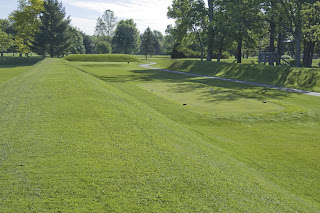 Archaeology: Why do you consider this one of your favorite sites?
BTL: The Newark Earthworks is my favorite site because of its grandeur and complexity — and because of its rich history. Covering more than four square miles, the monumental architecture creates a ceremonial landscape that encodes remarkably sophisticated geometrical and astronomical knowledge we’re only just beginning to decipher. And we’re able to decipher it only because the early citizens of Newark and Licking County found creative ways to incorporate major elements of this ancient architecture into their own 19th century landscape.

Archaeology: What were the “creative ways” that the early citizens of Newark and Licking County found to preserve these earthworks
BTL: Long before there was a National Park system or any notion that the state would preserve important cultural or natural wonders, Newark residents turned the Great Circle into the county fairgrounds — with the earthworks listed as one of the main attractions. The Octagon (with its attached circle) was saved by the local citizens of Newark and Licking County who agreed (overwhelmingly) to a tax increase so that the earthworks could be bought and handed over to the state for use as the Encampment for the State Militia (National Guard). When the militia left, they leased it to Moundbuilders County Club to manage as a park and golf course. As a result, Newark is the only place where you can go today to see intact geometric earthworks on this scale. Other communities, such as Circleville (named for the giant circular earthwork connected to a square enclosure) built over the earthworks. Nothing is left except the name to commemorate the fact that there was ever a circular earthwork there.

Archaeology: Why do you think the Newark Earthworks site is under-appreciated?
BTL: First of all, the burial mounds at Newark were mostly destroyed by the growth of the City of Newark during the 19th century, so none were excavated by archaeologists. As a result, nearly all the iconic artifacts of the Hopewell culture come from sites around Chillicothe or Cincinnati. So, when you go to museums or read books about the Hopewell, you seldom see Newark featured at all prominently because there are few artifacts available to tell the story. Ironically, possibly the most evocative Hopewell artifact I’ve ever seen, a small stone sculpture of a person wearing ceremonial bear regalia, the so-called “Wray figurine,” is often pictured, but usually without reference to the fact that it was found at Newark. (As a corrective, I prefer to call this remarkable sculpture the “Shaman of Newark” to situate the artifact, and the special person depicted, in the place where it was found.) Secondly, Newark is the farthest north of any of the major Hopewell earthworks, so rather than being located in the “Hopewell heartland,” it’s off on the periphery. Third, since the City of Newark engulfed the Newark Earthworks, many people have simply assumed, quite wrongly, that the earthworks were destroyed. There are even people who make the ridiculous claim that the Great Circle and the Octagon Earthworks are modern recreations built in the 1930s by the WPA. Finally, the Octagon Earthworks is managed today by a private country club, so lots of folks get the impression that it’s not also open to the general public. If you don’t feel welcome, you won’t visit the site. 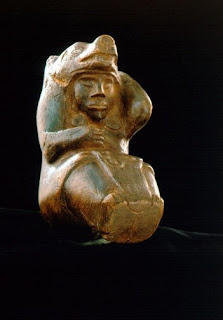