ODOT DOES REMOTE SENSING AT THE WRIGHT EARTHWORKS IN NEWARK

ODOT DOES REMOTE SENSING AT THE WRIGHT EARTHWORKS IN NEWARK 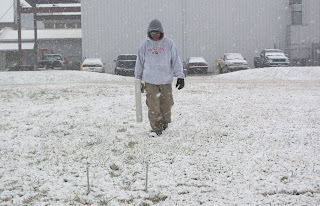 Neither snow nor rain nor heat nor gloom of night stays Dr. Jarrod Burks from the swift completion of his geophysical remote sensing projects. Earlier this month I met up with him at the Wright Earthworks, a fragment of the once gigantic square enclosure at the Newark Earthworks. He was doing a magnetometer survey for the Ohio Department of Transportation (ODOT).

ODOT archaeologist  Dr. Bruce Aument, informed me that  ODOT is acquiring several properties around its former garage for remediation purposes and wants to determine if any buried remnants of the nearby former Native American earthworks occur in the residential yards. The information will be used to design appropriate remediation efforts which will avoid or minimize disturbance to any identified archaeological remains associated with the earthworks. 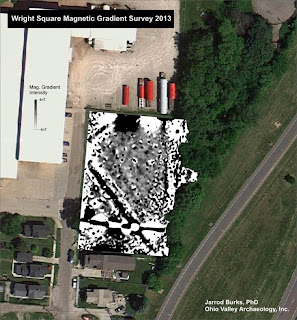 Bruce hopes that Jarrods survey at the Wright Earthworks will help to identify the magnetic signature of earthwork remnants on the nearby ODOT properties. The survey will have the added benefit of helping the Ohio Historical Society determine just how well our restorations of the earthworks match whats under the surface. It also may reveal additional traces of prehistoric activity at the site that could be focus of future research. When I arrived at the earthworks to meet with Jarrod, the weather had taken a turn for the worse, but the snow had no effect on his magnetic readings and he was able to continue working.
Jarrod is hard core! 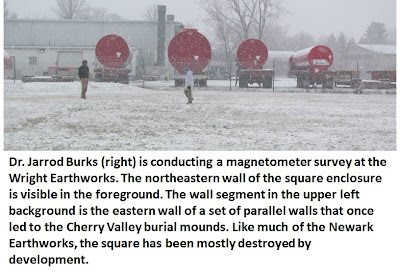