OCTOBER REFLECTIONS ON A CAREER IN ARCHAEOLOGY: “WE CANNOT ALL BE MONEY MAKERS!”

OCTOBER REFLECTIONS ON A CAREER IN ARCHAEOLOGY: “WE CANNOT ALL BE MONEY MAKERS!”

October is both Archaeology Month and American Archives Month!

In recognition of this happy confluence, I offer the following excerpt from the diary of Warren K. Moorehead, the Ohio Historical Society’s first curator of archaeology. The diary is part of the Moorehead papers in the Society’s archives.

Moorehead is writing on October 18th, 1897, after having secured a leave of absence from his duties at the Society for health reasons. He had contracted tuberculosis and was planning to travel to the southwestern United Statesto recuperate in the dry, desert air.

He had been criticized by his well-to-do family, heirs to the King Powder Mills gunpowder fortune. They did not approve of his choice of career and objected to the extravagant amounts of their money he squandered on his archaeological pursuits.

Concerns over his mortality may have prompted him to look back on his career and reconsider the choices he had made.

Afternoon in the Museum

I have been too ambitious entirely so and spent too much money on my science. I can see that now. I have promised all my relatives that Evelyn [his wife] can run the ship of state from now on. …

My work has cost me much — yet it will stand when the Powder-Cartridge-Bank Corporations are forgotten. It shall endure and business men in saying that it has not paid me and has been a financial drain overlook that greater fact that its success cannot be gagued [sic] by monetary standards.

Men do not ask what a painter left, what a poem is worth, what a scientist’s book brought. The work stands upon its merits as a part of art or literature or science.

My work is full of errors and shortcomings. I realize that fully. But it is a work of record — of tabulation of facts and as such men shall refer to it in the future when our mounds are gone.

I say this not egotistically. I have always regretted that I could not manage money affairs to better advantage. My salaries in my calling have invariably been small. 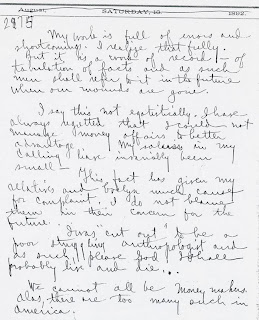 This fact has given my relatives and Evelyn much cause for complaint. I do not blame them in their concern for the future.

was “cut out” to be a poor struggling anthropologist and as such, please God, I shall probably live and die.

We cannot all be money makers. Alas, there are too many such in America.

But I pray that when the literature of Ohio Valley Archaeology is compared 100 years from now I shall have some small place among those of us who have been toiling in the fields of this science.

Moorehead need not have worried about his “small place” in the history of archaeology. During the course of his long career, he explored the Hopewell Mound Group in Chillicothe, Fort Ancient in Warren County, and many other sites in Ohio and beyond. He was instrumental in preserving Fort Ancient as well the Cahokia Mounds in Illinois, which is now on the UNESCO World Heritage list. And we have high hopes that Fort Ancient, along with six other Hopewell Ceremonial Earthworks, will be joining it one day soon! 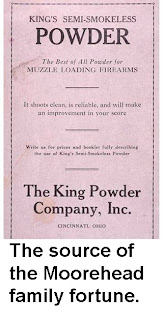 Moorehead was not allowed to return to his duties at the Ohio Historical Society following his recovery from tuberculosis. Instead, he moved on to become the first curator of archaeology for the Robert S. Peabody Museum of Archaeology in Andover, Massachusetts.

In addition to his remarkable career as an archaeologist, Moorehead also became an outspoken advocate for Native American rights at a time when such advocacy was not only unfashionable, but potentially dangerous.

PS This blog post expands upon my October column in the Columbus Dispatch.