The Ohio Historical Society finally is replacing the out-dated toilet facilities at Serpent Mound. (If you’ve ever been to the site and had occasion to use the existing toilets, I think you’ll be as pleased about this development as we are!) In order to make sure the installation of the new sewer lines did not destroy any important traces of the archaeological record at this world-class site, OHS contracted with Jarrod Burks of Ohio Valley Archaeology, Inc. to conduct a remote sensing survey of the area. Jarrod identified some locations where important features (hearths or storage pits, for example) might be present, so the line was re-routed to avoid them. 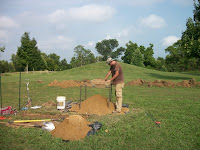 Then OHS hired the archaeological contract company ASC Group, Inc. of Columbus to excavate test pits along the path of the sewer lines to make sure no artifact concentrations that might not have been picked up by the remote sensing would be lost. 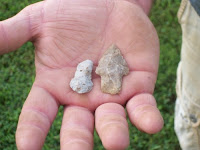 Kevin Schwarz, the lead archaeologist for this project, offered the following thoughts on doing archaeology at Serpent Mound: “It was a thrill for the three archaeologists from ASC Group, Inc. to be able to do excavations at the Serpent Mound State Memorial. Serpent Mound is one of the best known and most important effigy mounds in North America and indeed the world. However, despite this level of importance very little is known about the archaeology of the ridge top area around the serpent.” The ASC team made some great discoveries, including the Adena spear point (called a Cresap point) and small drill shown in the picture, which will help to fill in our broader understanding of the way ancient people used the entire landscape before, during and after Serpent Mound was built. 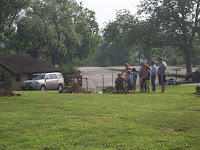 Kevin added the following thoughts at the conclusion of fieldwork:”During the eight days that we were working at Serpent Mound State Memorial we had many positive interactions with visitors to the site who shared their enthusiasm and interest in what we were finding and in what the artifacts might tell us about the Native Americans who made Serpent Mound.”