On November 4th 1791, the Miami Indian Chief Little Turtle and the Shawnee Chief Blue Jacket (who was not, by the way, an adopted white captive) led a coalition of tribes against the invading U.S. Army of Gen. Arthur St. Clair. A force of about 1,200 Indian warriors attacked St. Clairs camp at the site of the modern city of Fort Recovery in Mercer County, Ohio, killing more than half of the 1,400 soldiers and sending the survivors fleeing in panic. It’s harder to estimate casualties on the Indian side, but according to one reliable estimate they lost only 21 killed and 40 wounded. This was the most spectacular military victory ever achieved by North America’s indigenous people over the U.S. Army greater even than Sitting Bull’s annihilation of a portion of Custers 7th Cavalry.

Two years later, on Christmas Day, an American army led by Gen. Anthony Wayne returned to the site of this devastating defeat. They found a landscape so covered with bones that they had to rake the piles aside to make room to erect their tents. On the following morning some of the soldiers collected and buried the remains, including between 400 and 600 human skulls, while others began work on building a fortification. Wayne named it Fort Recovery since it was to be a dramatic symbol of the recovery of the U.S. Army. This fort became a base for Wayne’s ultimately successful campaign against the Indians of the Ohio Country and the fort itself became one of the benchmarks of the Greeneville Treaty line. 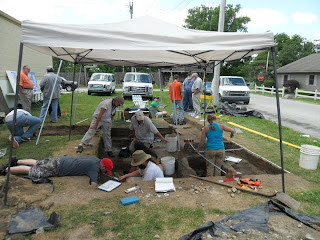 In an effort to learn more about Fort Recovery and the battles of the Indian Wars waged across this bloody ground, a team of archaeologists from BSU, including Keller, Mark Groover, and Mark Hill of BSU are searching for traces that might be preserved amid the yards and back alleys of the modern city of Fort Recovery. I describe some of the results of this search in my August 21st column in the Columbus Dispatch. The team worked with Jarrod Burks of Ohio Valley Archaeology, Inc. to conduct a remote sensing survey of some likely locations, which they subsequently investigated through excavation. 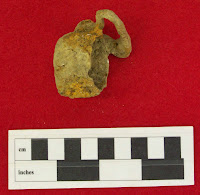 In one unit the team discovered traces of what is likely to prove to be one of the walls of the original fort in a miraculously preserved patch of ground just across the street from the restored fort. Artifacts found in these excavations include the center band from a 1766 Charleville Musket, a musket ball and two pieces of a broken spoon, all of which relate to the period of the Indian Wars and so either are objects left behind in the wake of St. Clair’s defeated Army or material discarded by Wayne’s men during the construction of the fort. This just goes to show that important traces of the past can be preserved almost anywhere!

The BSU team deserves enormous credit for their efforts to recover these priceless fragments of Ohio’s story. 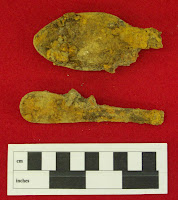 Here is a link to my column in the Columbus Dispatch: http://www.dispatch.com/content/stories/science/2011/08/21/scientists-find-more-secrets-at-ohio-fort.html