In 1928, Ohio Historical Society archaeologist Emerson Greenman excavated the so-called “Eagle Mound” in the Great Circle at the Newark Earthworks. He also excavated the remains of the Wells Mound Group, located a few blocks to the west of the Great Circle. At Eagle Mound, Greenman uncovered the remains of a ceremonial Big House and a handful of artifacts that may have been left as offerings. He found a crescent-shaped ornament made from copper and a possible beaver effigy also made from copper. The three mounds of the Wells Mound Group had been badly damaged by looting and plowing. Some farmer apparently had even used one of the mounds as a place to bury a horse. Even so, Greenman still made a few interesting discoveries here as well. He recovered a spear point made from Flint Ridge flint as well as a shovel-shaped slate pendant from Wells Mound No. 1. In addition, he found a slab of mica from Wells Mound No. 2. Very little has ever been published about the results of these excavations and the artifacts have never been displayed until now. The Ohio Historical Society has brought these artifacts back “home” to Newark where they now form a key part of the new exhibits at the Newark Earthworks Visitors Center. Other new additions include a copper ax found near the Eagle Mound and a mannequin representing a Hopewell culture spiritual leader depicted in a stone figurine found during excavations at Newark in 1881. The Shaman of Newark, also referred to as the Wray figurine, is a remarkable carving of a person wearing bear regalia who may, in fact, be shown in the act of transforming from a human into a bear-spirit as part of a shamanic ceremony. 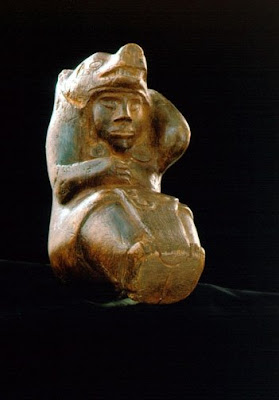 These new additions allow visitors to make a more personal connection with the ancient builders of the Newark Earthworks. The Shaman of Newark seems to come to life to share the secret of how the earthworks are tied to the intricate cycle of the rising and setting of the moon. And, for the first time in two millennia, a few of the actual artifacts made and used by the people who built the earthworks are on display for visitors to the earthworks to experience.