When it comes down to it, for every hour spent in the field doing archaeology, several hours are spent in the lab processing and analyzing the data. It would seem that field work is never done. A case in point is a number of soil samples collected at Ft Meigs during the 2001-2002 renovation. When General Harrison built Ft Meigs in 1813, he selected the site for a number of reasons including its location on a high bluff facing the Maumee River that was well above annual spring floods. It was also a somewhat more protected site being inland from the open shores of Lake Erie. Harrison chose well in picking this location, and it was probably for many of these same reasons that a group of Late- Prehistoric Native Americans would establish a large village there in the mid to late 1500s. These people were the last two or three generations before contact with Europeans and were still living a traditional lifestyle. Knowing 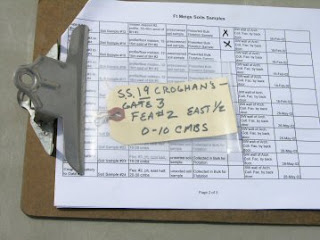 how they made a living is important in order to see just how much their culture changed after Europeans made their way into Ohio. When the stockade was replaced during the most recent reconstruction it exposed a number of prehistoric midden or trash deposits and other features along the bluff edge generated by the sites original inhabitants. It isnt every day that anyone gets a close look at such deposits at a protected site like Ft. Meigs, so when the opportunity availed itself, several gallons of midden soil were collected for future analysis. The collection procedure was as follows. After a cross section of the deposit was mapped and photographed, samples of soil were removed and put into heavy plastic bags inside 5 gallon buckets. The bags were sealed and tagged with the exact location (as above) of where the soil came from. These locations were also noted on the cross-section map of the deposit. Without recording this information it is just another bucket of dirt and not of any particular scientific use. The samples were then brought to Columbus and stored in the archaeology collection facility.
Midden deposits are characterized by rich, dark, organic soils often interspersed with ash layers. Middens contain the stuff of everyday life of the people that made them including plant and faunal remains, broken bone and stone tools and pottery shards a time capsule of sorts. Continual dumping in the same location effectively seals off the core of the midden from the atmosphere and over time the deposit tends to become anaerobic or without oxygen. This provides an excellent preservation environment for organic materials and other

fragile items buried in the midden. If left in the open on the surface, this same material would completely deteriorate in a very short time. While great discoveries in them are rare, midden deposits provide insight into how people long ago made their living, what they ate and what types of plants and animals were available in their local environment. There is no doubt that people in the future will be analyzing the contents of trash dumps being generated today to see just how people lived in the 21st century. The problem is to extract and properly analyze the data.
Taking advantage of the recent warm weather it was decided to reduce the

backlog of soil samples in storage and process them by water screening. Water screening uses a lot of water and produces a lot of mud, so it is an activity that is better undertaken out of doors in warm weather. It is actually a simple operation, as seen in the accompanying images. The soil is poured into a series of 1/8 inch mesh sieve boxes and after hand picking the larger items from the screen the samples are sprayed with a hose until all the soil is washed away. Fortunately midden soil is typically loose and organic, almost like potting mix and as a result it doesnt take long for water to do its thing. The Ft. Meigs samples produced a rather mundane looking residue of fish scales, charcoal, small 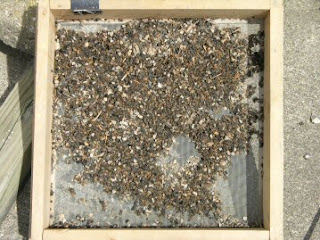 pottery shards, animal bone fragments and broken or exhausted stone tools. Generally speaking about 1 quart or less of this material was extracted from 4 gallons of raw soil. Although volume-wise the returns may not seem that great, they do represent excellent research potential. It should also be noted that as a part of this operation an unsorted measure of about 1 gallon of raw soil was taken from each sample prior to water screening and saved for flotation. Floatation is a more refined process often used to recover very small seeds and other minute materials that would normally pass through even a fine mesh screen.
It seems to be a general rule that people only throw away stuff that is broken, worn out or of no further use. However, one persons trash is another persons treasure and in the hands of a knowledgeable researcher it can provide a wealth of information. For example, through C14 dating, charcoal found in the same deposit as a projectile point or pottery shard of a particular style can be used to date that item to just when it was used or at least discarded. When similar items are found on other sites this information can provide a ready-made time frame for the second location. Or it may show that certain plants were a mainstay of their diet, perhaps species that were never considered before. To the casual observer very little if any of this might appear particularly exciting, but it all represents small parts of the bigger picture and as such is a necessary step if archaeology is to be done correctly.