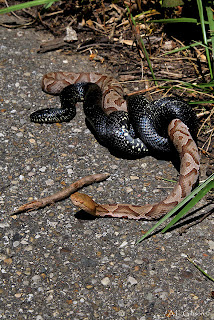 Ohio flora blogger A. L. Gibson has been a guest blogger on our site once before. This time his blog is not about plants, but a rare observation of interaction between two species of snakes. The subjects are the venomous Copperhead (one of only three venomous snakes in Ohio) and a Black Kingsnake (also called the Common Kingsnake).  Copperheads were once very widespread in Ohio, but are now restricted mostly to southeastern Ohio and extending very limited northward along the Ohio River and also in Ashland and Wayne Counties. Kingsnakes are much more rare, being reported from only seven counties in extreme southern Ohio (Adams, Scioto, Gallia, Jackson, Meigs, Vinton, and perhaps Lawrence). The Ohio Turtle, Lizard and Snake Atlas (Wynn and Moody, 2006, Ohio Biological Survey) indicates that even in these counties it is tough to find one and that this is the northern extent of its range.

Wynn and Moody also report that: One often hears well-informed landowners say that they never harm these snakes due to their diet of rodents and venomous snakes (especially the Copperhead). (I have to wonder is that statement is wishful thinking. All too many people kill any snake they see, without discrimination.  How many landowners are so well-informed?)

The behavior Gibson reports is not new to science, but being able to observe this first hand, and to be able to capture excellent photos of the battle is quite a coup! Gibson has allowed us to share one of his photos here, but to see all his images and hear his own tale as the drama unfolded before him, go to his Blog site.