As seen in earlier blogs, Pickawillany was a mid-18thCentury English trading post located within a large Miami Indian town in present day Miami County, Ohio.  In 1752 the site was attacked and destroyed by the French. Archaeological research has been going on there since about 2002 in an attempt to determine the spatial layout of the site. Over the past few field seasons at Pickawillany the field crews have located several major features and recovered a number of interesting objects. Among these are two early French musket/trade gun butt plates. Overall items such as these tend to be exceptional finds in archaeological contexts. Muskets were tools of the trade in their day and most saw severe use. They were out in all sorts of weather, dropped in the creek, used as crutches and clubs and generally exposed to dirt and dust. Most ended up on the trash heap of history so to speak and those that survived were often cannibalized for parts or the parts themselves repurposed into something completely different and unrecognizable as to its original form. It is rare that such things are found just where someone left them, even if it is a trash pit.

At Fort Michillimackinac, a very early French outpost at the northern tip of lower Michigan, several musket/ trade gun components were recovered over the years from a series of excavations. These and hundreds of other objects recovered there are well documented and were excavated in a systematic manner as is to be expected in a well-managed and properly conducted archaeological excavation. The objects are in a permanent collection and available to researchers and other interested parties. The results were also published and accessible in that manner. At the other end of the spectrum was the so-called Tunica Treasure. This outstanding occurrence was found by an ambitious but less than well trained pot-hunter at a site near St Francisville, Louisiana. Legend had it that in the early 1700s the Chief of the Tunica Indians had been buried with a great quantity of gold and silver bestowed on him by the King of France for his friendship toward early French settlers in that part of the world. Recovering the treasure in order to get rich was the true goal of the excavator.

What was actually uncovered was a tomb containing a wealth of 17th and 18thEuropean material goods. They were part of what appears to be a somewhat complicated but friendly alliance between the Tunica people and early French and Spanish colonists in Louisiana. Because of the way the find was dismantled in a mad dash to find loot, there are major questions concerning the tomb and its contents that will never be answered.  In addition to the remains of several early trade muskets the artifact cache included Rhine Valley stoneware, Dutch delftware, iron and brass pots and kettles, glassware, jugs, bowls, jars, iron tools, edged weapons and an array of other select objects and rare types of early European trade materials. It was almost like the inventory of an 18th Century department store had been placed in storage at a location that was lost to time. Sort of the ultimate Storage Wars.  Unfortunately the contents of the tomb were removed without regard to what was found with what or how it was arranged in the tomb. These are these are the basic and underlying principles of archaeology and not following them properly is like indiscriminately ripping pages out of a book and giving it to someone else to read and telling them to create a book report. The trade muskets found in the tomb presented a particular problem. The wooden stocks had pretty much decayed into dust and the excavator gathered up the remaining parts as a lot and separated them at a later time according to its function. In other words he ended up with a pile of butt plates in one box, a bundle of trigger guards in another and all the gun locks in a third and so on. Because there are no notes or other data available it isnt known exactly what type of parts were originally together on a given gun. In the early days of European musket manufacturing there was only a moderate amount of standardization as to overall patterns but guns were often produced in relatively limited lots in independent workshops and small armories. While many were operating under royal charters, in most cases little is known today about individual innovation and production methods such as gun lock mechanics, engraving and other subtle technological or style changes over time.  Most times early gun parts are found one at a time as at Pickawillany.

At Tunica was a golden opportunity to associate all the parts of one particular style of gun, to find out what went with what, on not just one but on several very early fire arms. It was a supreme opportunity supremely lost. Knowing what type of parts or accoutrements were made in a particular shop and mounted together on a particular musket pattern can be invaluable to modern researchers trying to work out production sequencing and dating. Archaeology is a cumulative effort and making a proper assessment of what was found at one site is often dependent on what was found and properly assessed in a previous project 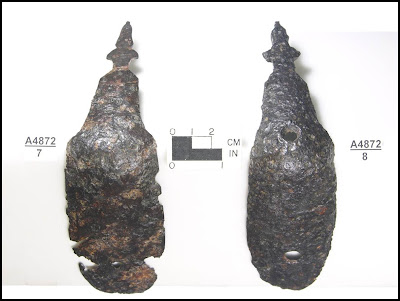 Shown are two views of a pair of iron butt plates originally mounted on early French muskets and recovered from two different trash pits at Pickawillany. These pits are large and deep, that is 3.5 to 4 feet in diameter and up to 4.5 feet deep. In fact there is a natural limit to how deep they can be. Pickawillany is located on a glacial outwash terrace and if you excavate much deeper that about 4 or 5 feet the sandy-gravel soil at that depth is particularly incompetent and caves in on itself. The fill of the pits excavated so far has been surprisingly similar, one pit to another. That is there are large metal objects at or near the bottom with various fill episodes noted above them. Contents of the fill include gunflints, trade beads, lead scrap and other metal objects. Intermixed are discreet burning episodes as if someone dumped a quantity of hot embers into the pit. There is also a great array of faunal and floral remains. They are trash pits after all! 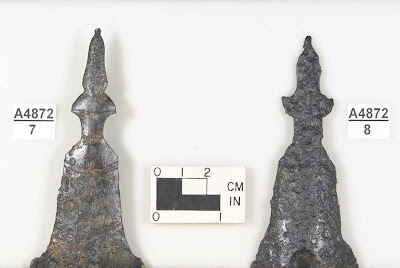 The butt plate on the left in both views, A4782/7 was recovered in 2010 from Feature #45. It dates to about 1699-1708. It is a large, flat semi-ovate iron butt plate featuring a flattened pear finial on the tang. It attaches to the stock with a screw through the plate above the toe and an underpin lug on the bottom of the tang extension It is considered a Stage I butt plate in the development of French military fusils (muskets) and trade guns. Part of an identical item was recovered at Ft Michillimackinac in Michigan. This style in particular seems to be extremely rare from archaeological contexts.

The butt plate on the right, A4782/8 was recovered in 2011 from Feature #10.It is also flat and semi-ovate in shape although it is slightly smaller than A4782/7. It dates to around 1730-1745 and considered a Stage III butt plate, a transitional style in French musket development between the earlier Regency style and the Rococo style associated with Louis XV. As with A4782/7 one like this was found at Fort Michillimackinac.