More on the Lithic Lab and French Flint

More on the Lithic Lab and French Flint

As a follow up to our guest blogger Erin Claussens excellent posts about the Ohio State Museum Lithic Lab, the following is a bit of foundation concerning the French Flint Industry that HH Ellis and Don Crabtree found so fascinating. Thanks Erin for all your help and hard work. 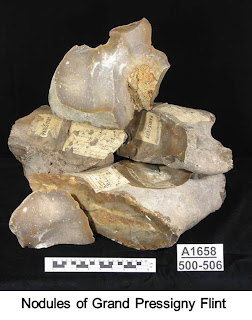 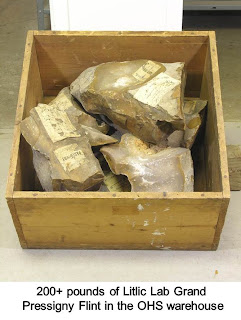 The French flint industry is or was centered in the village of Le Grand Pressigny in the Indre-et Loire region of central France, about 150 miles southwest of Paris.  In geologic terms Grand Pressigny Flint dates back to the Upper Cretaceous Period of about 65 million years before present and occurs in irregular nodules and as strata in the bedrock. By contrast, Ohios deposits of Flint Ridge and Upper Mercer or Coshocton Flints are upwards of 300 million years old. Grand Pressigny Flint has been utilized for tens of thousands of years in areas of Western and Central Europe during the Middle to Upper Paleolithic periods, which is from about 100,000 to 10,000 years ago and has even been found in very specific historic contexts in North America. During the Neolithic period beginning about 10,000 years before present Grand Pressigny flint entered into its Golden Age and became extremely popular as an exceptionally high quality tool stone. During the 4thand 3rd millennia BC the region of Le Grand Pressigny became a center of both flint mining and the production of long, dagger-like blades that were distributed by the thousands throughout Europe. This vibrant industry continued until the flint axes and blades produced near Le Grand Pressigny were replaced by more durable bronze and iron implements. More recently the Le Grand Pressigny region was revitalized as the home to a flourishing gunflint industry that supplied the French armed forces in actions around the globe or wherever flintlock muskets and rifles were used either in warfare or as a tool of the day. It was thought by many that these gunflints were superior to all others and has even been hinted at that during the Revolutionary War that the British soldiers whose life actually depended on a reliable gun flint favored the high quality, honey-colored French gunflints over their domestic Brandon gun flints. French gunflints have been found on archaeological sites throughout northern Africa, Europe and North America including many 17th and 18thcentury sites in Canada and the United States east of the Rocky Mountains. In Ohio, French gunflints have been found at Pickawillany, Ft. Meigs and Ft. Laurens and numerous other sites from the Late Colonial period through War of 1812. 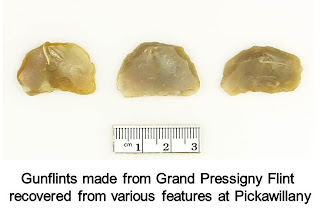 The blade production process is fascinating to watch. The flint worker or knapper first selects a large block of raw flint, termed a core, suitable for his purpose. Once a core is properly prepared a master knapper can detach quality blades in quick succession and easily produce dozens of blades from a single specialized core referred to in the local vernacular as a livre de beurre or a pound of butter for their distinctive shape. In form the blades are long and narrow with mostly parallel edges that are razor sharp and ready to reshape and refine into a very functional knife known as a Charavines dagger.   Just like there are flint knappers in the United States and Canada attempting to recreate ancient crafts that have their roots so to speak in the Lithic Lab, there are practitioners in Europe that have over the years toiled to rediscover the ways of the ancients in their part of the world.

Attached are a couple of links that highlight blade making in the style of the Le Grand Pressigny flint industry and recreating the Charavines dagger by modern French flint knappers.