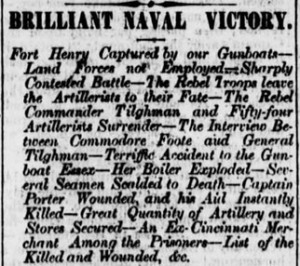 Excerpt from the Belmont Chronicle, February 20, 1862, p. 2, column 2
After this victory, General Grant pushed his troops on to Fort Donelson where he achieved another decisive win on February 16, 1862, securing Tennessee and Kentucky for the North. According to a headline in the February 20, 1862 issue of the Belmont Chronicle, after two days of terrific fighting, the Union troops sent rebels skedadling in every direction. Grant became even more popular in the North as result of this battle, and his actions earned him the epithet Unconditional Surrender Grant since he would accept no terms other than an unconditional and immediate surrender from Confederate General Simon Bolivar Buckner. (To see the full article click here.)

During the Civil War, newspapers regularly printed stories like this, keeping those who remained at home informed about what their family, friends and neighbors were experiencing on the battlefield. With the Ohio Historical Societys latest contribution to the National Digital Newspaper Program and Chronicling America, these and other stories are now easier than ever to access. Issues from the following Ohio papers are now online and keyword searchable at Chronicling America: Belmont Chronicle and Farmers, Mechanics and Manufacturers Advocate (St. Clairsville) from 1853-1855 Belmont Chronicle (St. Clairsville) from 1855 to 1894 Highland Weekly News (Hillsboro) from 1857 to 1886 Urbana Union from 1862 to 1872 Xenia Sentinel from 1863 to 1865 These papers join over 4.5 million pages from more than 650 newspapers from all over the nation, including 24 others from Ohio, to chronicle United States history from 1836 to 1922. Over the coming months, even more of Ohios Civil War newspapers will become digitized and freely-available on Chronicling America through the National Digital Newspaper Program in Ohio.

The National Digital Newspaper Program is a partnership between the National Endowment for the Humanities and the Library of Congress and state projects to provide enhanced access to United States newspapers published between 1836 and 1922. NEH awards support state projects to select and digitize historically significant titles that are aggregated and permanently maintained by the Library of Congress. As part of the project, the Ohio Historical Society contributed 100,000 newspaper pages to the project over a two year period ending June 2010 and will contribute an additional 100,000 pages by the end of August 2012. By Jenni Salamon, Project Coordinator, NDNP in Ohio