There was a lot of excitement at the Fort Ancient Earthworks in 2005. Dr. Jarrod Burks, an archaeologist with Ohio Valley Archaeological Consultants, was conducting a remote sensing survey of portions of the interior of the great enclosure in preparation for an erosion control project at the site. We wanted to make sure that the construction activities involved with repairing the damage to the site did not cause more damage to important archaeological traces buried beneath the surface.

Unexpectedly, a dramatic circular pattern appeared in Burks’ data that didn’t reflect the location of any feature documented on any 19th or 20th century map of the site. The circle was more than 200 feet in diameter. According to a widely circulated press release, issued at the time by the Ohio Historical Society, it was “the first major architectural feature discovered at the Fort Ancient Earthworks since the site was first explored and mapped” and it had “the potential to add considerably to our understanding of how ancient Ohioans used this important site.” From the remote sensing data, we couldn’t tell whether it was the remains of a circular earthwork, or ditch, that had been leveled, or if it might be the remains a giant “woodhenge” such as had been uncovered at the Stubbs Earthworks, also in Warren County, by Dr. Frank Cowan and the Cincinnati Museum Center (see Dr. Cowan’s article “Stubbs Earthworks: an Ohio Hopewell ‘Woodhenge'” in Ohio Archaeology: an illustrated chronicle of Ohio’s ancient American Indian heritage).

In 2006, Dr. Robert Riordan and his students at Wright State University came to Fort Ancient to investigate this mysterious circle. Dr. Riordan and his team excavated a trench across the edge of the circle in order to determine how it had been constructed. They labeled this Trench A. The team also excavated an 8 by 8 meter (26 by 26 feet) block at the center of the circle to explore a particularly dramatic anomaly discovered during the remote sensing phase of work. They referred to this as Unit B. Dr. Riordan christened the large circular feature the “Moorehead Circle” to honor Warren K. Moorehead, the first curator of archaeology for the Ohio Historical Society and the person most responsible for the preservation of the Fort Ancient site as a State Memorial. Moorehead never knew this particular circle existed, but he did conduct some of the earliest systematic excavations at Fort Ancient and the name is an appropriate recognition of his many contributions to our understanding of the site.

Trench A Trench A was 16 meters (52 feet) long and four meters (13 feet) wide. It cut across the edge of the circle and revealed that it was made up of two concentric circular rings of postmolds. (Postmolds are stains in the soil that mark the former locations of posts.) The outer circle was made up of a series of large post holes, about 9 inches in diameter, set into the ground at about 30 inch intervals. The posts were set more than three feet deep in the ground and had been chinked with stones. This suggests the posts had been quite tall and so needed the support of the stone. Riordan estimates the posts originally were 10 to 15 feet in height. And if the 30 inch interval was maintained all the way around, he states the circle would have included more than 200 individual posts. The inner ring of posts was about 15 feet inside the outer ring. The posts were about the same diameter, but they had not been set as deep and the holes had not been chinked with stone, suggesting that they were not as tall as the posts of the outer ring. A radiocarbon date on charcoal from a postmold associated with the Moorehead Circle “woodhenge” suggests it was built sometime between 40 BC and AD 130. (The range is due to the statistical vagaries of radiocarbon dating.) 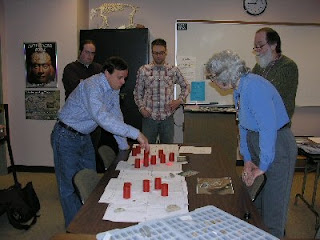 Dr. Riordan and his students show OHS archaeologists Martha Otto
and Bill Pickard the mapped pattern of postmolds in Trench A.

Unit B Excavations in the center of the Moorehead Circle revealed a deposit of bright red, burned soil that had been used to fill in a pit. The original pit was 15 feet long by 13 feet wide and 2 ½ feet deep. Around the outside of the pit there was a shallow trough in which some large timbers of red oak had been burned, at least on one side of the pit. The Wright State team found very little ash in the pit, so Dr. Riordan figures the large quantity of burned soil must have been brought from somewhere else. The red color likely had a special meaning that was connected to the ceremonies relating to the use and filling-in of this pit. Burned fragments of the red oak timbers from the trough on the side of the pit suggest this fire burned between AD 250 and 420. This is significantly later than the date for the woodhenge, suggesting to Dr. Riordan that the circle of posts may have been built long before the creation of the central pit in Unit B. He cautions, however, that “one radiocarbon date constitutes shaky ground upon which to erect one’s reconstruction.” Nevertheless, it is certainly possible that the circle had a long history of use and re-use and the two concentric circles of posts may represent two separate phases of construction rather than one circle with a double set of posts. The Wright State University excavations at the Moorehead Circle turned up a large number of typical Hopewell culture artifacts, including 86 bladelet fragments, almost half of which were made from Flint Ridge flint, some mica scraps, a couple of textile fragments, and more than a thousand pottery sherds. These finds confirm that the Circle was the focus of a variety of activities for the people who built and used the Fort Ancient Earthworks.

Dr. Riordan concluded his report on the 2006 excavations and the subsequent analyses with the following observation: “With a bit less than 5 percent of the area of the Moorehead Circle having been excavated, it is premature to spell out many hard conclusions.” There are many questions remaining to be answered and, in fact, many new questions have arisen in the wake of the new discoveries. Dr. Riordan goes on to say that this “is the way of scientific inquiry.” Stay tuned to this blog, because Dr. Riordan expects to be back at Fort Ancient this summer continuing his investigation of this remarkable circle. We’ll do our best to keep you posted on the latest developments.