Geoarchaeologist Elizabeth Sonnenburg and her geoscientist colleagues at McMaster University in Hamilton, Ontario, are finding ways to track ancient Americans across the now submerged landscapes of the Great Lakes region. They presented their results in the July issue of the journal Geology and it is the focus of my July 10th column in the Columbus Dispatch. One of the most remarkable features of this research is how important the smallest class of stone artifacts microdebitage is proving to be in the search for ancient Americans.

Microdebitage is produced in enormous profusion during the manufacture of stone tools. According to one estimate cited by Sonnenburg and her co-authors, more than one million pieces of microdebitage can result from the manufacture of a single stone tool. We don’t usually think about microdebitage because the tiny flakes are smaller than 1 mm in length and at most terrestrial archaeological sites the benefits to collecting microdebitage largely have been outweighed by the efforts required to recover and analyze the prodigious quantities of it that would be present. As the work of Sonnenburg and her colleagues make clear, however, the high density of microdebitage makes it an invaluable resource for discovering submerged Stone Age sites, which are not so readily identified using more conventional methods. An important issue, and one I did not have the space to explore in my column, is the difficulty in reliably distinguishing microdebitage from naturally-produced sedimentary particles.

Sonnenburg and her co-authors list four criteria they used to identify microdebitage: 1. High angularity. Sedimentary particles in most environments would exhibit edges rounded by weathering and erosion due to tumbling against other particles in water or wind. Microdebitage, however, should stand out by having sharp, angular edges as longs as it, too, has not been subjected to that sort of erosion. 2. Particle geometry. Instead of the more usual spheroidal or blocky particles, microdebitage tends to look like typical debitage, but on a much smaller scale. According to Sonnenburg et al. microdebitage consists of “flat or blade-like grains with triangular, subrectangular, [or] trapezoidal shapes.” 3. Conchoidal fractures and flake scars. Flint and other stone suitable for making stone tools have the property of conchoidal fracture and flakes produced during the manufacture of artifacts, regardless of size apparently, exhibit features such as previous flake scars on the dorsal (or outside) face of the flake and ripple marks on the ventral (or inside) face. 4. Size of the flake. Microdebitage, though small, tends to be larger than ordinary sediment particles at least in the sedimentary contexts studied by Sonnenburg and her team. 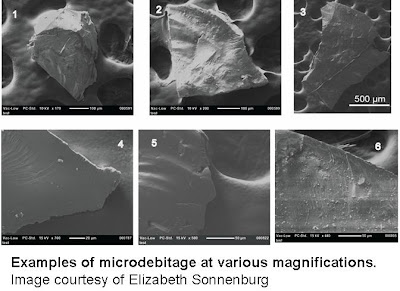 It will not always be possible to distinguish microdebitage from naturally-produced stone chips. In certain sedimentary contexts, it can be hard to distinguish macrodebitage, or even simple stone tools, from naturally-produced objects. But by using all of these criteria and being mindful of the particular sedimentary environment in which the microdebitage occurs, microdebitage analysis holds much promise for archaeology. Here is a link to my Columbus Dispatch column: http://www.dispatch.com/live/content/science/stories/2011/07/17/debris-points-to-lost-lake-sites.html?sid=101