LOST ARTS OF THE STONE AGE 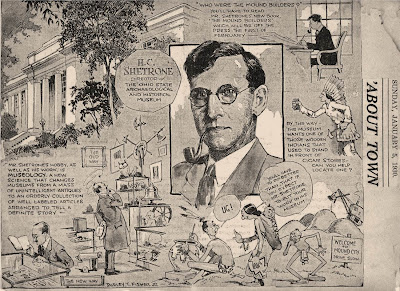 While doing research on the Ohio Historical Society’s Lithic Laboratory, which has been the subject of several recent blog posts, we came across a transcript of a remarkable radio program featuring Henry Shetrone, one of our most famous archaeologists. The program was originally broadcast on May 19th, 1938 by Science Service. It was one of a series of marvelous programs on science produced in collaboration with the American Association for the Advancement of Science, the National Academy of Sciences, and the National Research Council.

Shetrone mainly talked about our then new Lithic Laboratory and the important contributions it was beginning to make to our understanding of what he referred to as “primitive man.” He also made many more general points that are well worth remembering.

The following excerpts are among the more important messages he shared with his radio audience.

MR. DAVIS I thought there were already thousands of stone arrowheads and relics in museum collections?

DR. SHETRONE There are.  And unfortunately, a great many of them are just curios, interesting to look at, but with no proper scientific record to show where they were found and the type of Indian life they belonged with.

But here’s the point finding such things is just the beginning of archaeological science.  Digging up possessions of ancient men may be exciting.  But often the relic thus found becomes far more important when it’s taken to a museum or laboratory and studied under a microscope or put to chemical tests, to determine just how and by what tribe it was made.

DR. SHETRONE There’s a good deal of significant evidence like that, to be interpreted at an Indian site, but it takes training and experience.  That’s why we archaeologists urge the amateur not to damage a site by moving and destroying the evidence.  We feel a good deal the way a detective does, when he comes to a scene of a crime and finds the clues all messed up.   MR. DAVIS Once an Indian site is disturbed, there’s no way of putting the evidence back–

DR. SHETRONE That’s just it.  It’s a page of history that we can’t ever read.

Due to the continuing relevance of Shetrone’s educational messages and also to the long neglected historical significance of OHS’s Lithic Lab, we decided to have a little fun and recreate the original broadcast with Linda Pansing playing the part of Mr./Ms. Davis and me playing the part of Dr. Shetrone.

We hope you enjoy the result!

Do keep in mind that the interview took place originally in 1938 and some things have changed in the decades between then and now. For example, it is no longer considered proper to refer to ancient peoples as “primitive man.” The use of the word “primitive” is now considered to be insulting to those cultures; and the use of “man” for “people” is now recognized to be sexist. Nevertheless, in the interests of historical accuracy, we have retained these terms in our re-enactment. 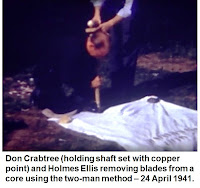 Also, in the program, Shetrone consistently is referred to as “Dr. Shetrone,” however, his PhD was an honorary degree conferred by Denison University. It is now generally considered appropriate to make that qualification clear.

At one point in the program, Shetrone refers to the “Folsom” culture, which, at the time he was speaking, included what we now recognize as two ancient cultures the earlier Clovis culture and the somewhat later Folsom culture. 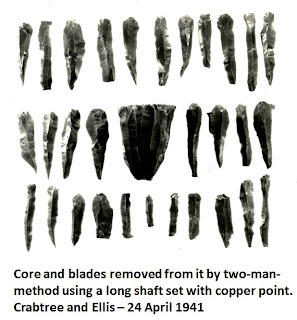 Finally, Shetrone’s references to what contemporary flintknappers could and could not do are no longer accurate. Thanks, in part, to the work of the Lithic Laboratory, flintknappers, such as Don Crabtree, learned how to replicate Clovis and Folsom points as well as the cores and bladelets of the Hopewell culture.