LETTERS TO A YOUNG SCIENTIST 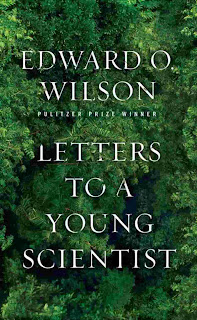 I highly recommend E. O. Wilsons latest book, Letters to a Young Scientist, to any young scientist, anyone contemplating a career in science, anyone currently engaged in science regardless of whether theyre young or not, as well as anyone in a relationship with a scientist who wants to better understand why their wife, husband, boyfriend, girlfriend, daughter, son, or whatever, is so passionately committed to their job.There is much between the pages of this short book to engage and inspire anyone involved in the scientific enterprise though it was clearly Wilsons intent to focus on providing counsel and encouragement to young scientists:
First and foremost, I urge you to stay on the path youve chosen, and to travel on it as far as you can. The world needs you badly.
The book is not just for young biologists, though obviously most of the books examples are drawn from biology. Even archaeology is mentioned two or three times!
As the title suggests, the book is written as a series of letters and in reading them you feel privileged to be having this exchange with one of the worlds greatest living scientists.
Each letter addresses a different aspect of a life in science ranging from First passion, then training to The scientific ethic.
I agree with just about everything Wilson writes with a few exceptions.
First of all, I think Wilson mistakes passion for zealotry when he says that real scientists dont take vacations (page 81). For those young scientists who are hoping to have reasonably healthy personal relationships and possibly even be somewhat involved in raising a family, I respectfully suggest that real scientists can, and should, take vacations. In my experience, vacations not only provide quality time with your family they also allow you to return to your scientific work with renewed energy and enthusiasm.
Also, nowhere in these letters does Wilson suggest that scientists have an obligation to share their discoveries and their passion for science with the general public. Granted we all cant be Carl Sagan or Brian Cox, but we all should recognize the vital importance of communicating with the broader public. And even if thats not where our particular talents lie, we can at least support our colleagues that do engage with the public instead of looking down on them. Outrageously, Carl Sagan was denied membership in the prestigious National Academy of Sciences because he devoted too much of his time to popularizing science instead of doing science.
Carl Safina, in answer to the question why communicate science?, argues persuasively that people desperately need to know “that scientists are people, that science is an honorable, trustworthy, and powerful endeavor that people should look to for answers, and as a way to help think through decisions. Wilson’s Letters make all of this abundantly clear, but it would have been nice if he had urged young scientists to make communicating science almost as much of a priority as doing science. Brad Lepper
Posted May 26, 2013
Topics: Archaeology