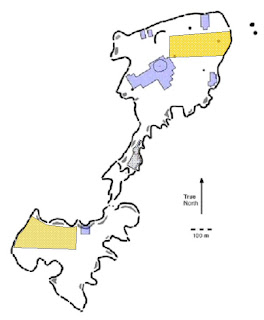 In 2005, the Ohio Historical Society was awarded a Save America’s Treasures grant from the National Park Service in order to address erosion problems at the site. During geophysical testing of proposed work zones, a 200 foot in diameter circular enclosure (now called the Moorehead Circle) was discovered in the North Fort. Warren K. Moorehead was the first curator of archaeology for the Ohio Historical Society and the person most responsible for the preservation of the Fort Ancient site as a State Memorial. Moorehead never knew this particular circle existed, but he did conduct some of the earliest systematic excavations at Fort Ancient and the name is an appropriate recognition of his many contributions to our understanding of the site.

Since no visible trace of the circle was apparent on the landscape this lead us to wonder what other features could be revealed using remote sensing and what could be learned about how the land was occupied and used by its past inhabitants.

To help us address these questions, the Kettering Foundation awarded the Ohio Historical Society a grant to conduct additional geophysics. The image above (courtesy of Jarrod Burks, with a few alterations regarding the Kettering work zones) shows Ft Ancient. The areas in blue were surveyed during the Save America’s Treasures project and the areas in yellow are being surveyed with funds from the Kettering Foundation. Two areas will be studied; a portion of the North Fort that is adjacent to the Moorehead circle and includes a large section of land between the stone mounds, and a section of the South Fort where Moorehead and others had previously located a Ft Ancient village. Unfortunately its exact location was not well documented.

The geophysical survey has started and will continue through November. And, as usual, I’ll keep you posted on our progress!