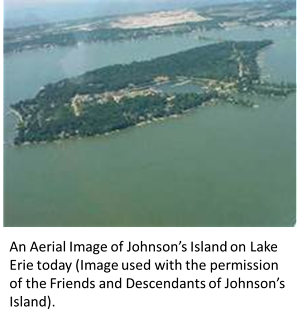 From July 1-3, the United States engaged in a battle in Pennsylvania that would ultimately lead to the high-water mark in the American Civil War at a place called Gettysburg.  While many enlisted men and officers would lose their lives, many others would be taken prisoner by either side.  For the Union members, it meant that they would be sent to places like Andersonville.  For the Confederate enlisted men and officers, it meant places like Elmira in New York, Point Lookout in Maryland-or two separate places in Ohio: for the enlisted men, they would be sent to Camp Chase in Columbus, Ohio while the Confederate officers were sent to Johnsons Island out on Lake Erie.
Johnsons Island, located approximately 3 miles north of Sandusky, Ohio, was selected as the site of a prisoner of war camp due to its ease of transportation by boat from Sandusky and the fact that many other islands out on Lake Erie were closer to the Canadian Border, which was not advantageous if a prisoner break were to occur.  Additionally, it may the island more secure as there wasnt really anywhere for the prisoners to run to in the event of an escape or prisoner break to occur.  The Prisoner of War camp was built on 16.5 acres of land and was built to house 2,500 prisoners of war. The maxiumum number reached for prisoners at the island at one time was 3,224 in January, 1864.  By the end of the Civil War some 10,000 prisoners of war would be processed through the camp. 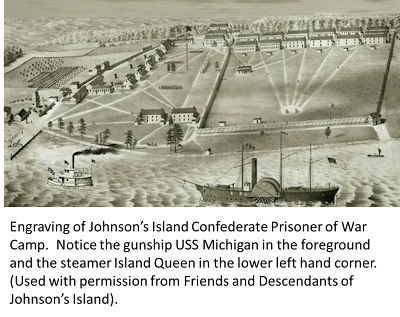 Some of the prisoners of war who passed through Johnsons Island included Isaac R. Trimble and James J. Archer (both captured at the Battle of Gettysburg), Henry D. McDaniel (who would later become Governor of Georgia during reconstruction and would help found what would become Georgia Tech University) and Lt. William H. Peel, who would keep a diary of his experiences as a prisoner until his death on the island in 1865 and Lt. Christopher Columbus Nash, who would serve as the Sheriff of Grant Parrish, Louisiana. Be on the lookout for a forthcoming article on this blog about Henry D. McDaniel and other articles about Johnsons Island and its incredible history. Chandler Herson