It’s That Most Wonderful Time Of The Year

It’s That Most Wonderful Time Of The Year

In the two centuries since they were first explored by European Americans the ancient earthworks of Ohio, although notable for their expansive scale and precise layout, were typically viewed as not particularly well understood static monuments to the past. The more dramatic of these, the great geometric earthwork complexes, date to the so-called Hopewell period of about 100 BC to about AD 400 -500, and occupy the middle third of a nearly 1,500 year tradition of erecting mounds and other earthworks in the Ohio Valley. Recently however much has been made recently of solar, lunar and celestial alignments that were encoded into the earthwork’s design and layout by the original builders; that the earthworks were not just places of ceremony and celebration but also observatories of the heavens and sophisticated calendars of the seasons writ large on the landscape. Its true that if two widely spaced stakes were driven into the ground an observer at one end would sooner or later be witness to some sort of celestial event at the other end. Even so there seems to be just too many significant alignments at different earthworks in different parts of Ohio to be the product of pure happenstance.

For example, along a specific alignment through the Observatory Circle and Octagon at Newark a once in a generation occurrence of the northern most rise of the moon on a nearly 18 year cycle can be both predicted and observed. Granted it just once every nearly 18 years but it none the less takes place. This is mirrored by the sighting of the southern-most rise of the moon – the other end of this extended lunar cycle – at the High Bank works, another combined circle and octagon earthwork located along the Scioto River south of Chillicothe and the counterpart to the Circle and Octagon at Newark. It can hardly be a coincidence that the two ends of the same cyclical lunar phenomenon are observable at the only two combined circle and octagon earthwork sites in North America if not the world.

At Fort Ancient in Warren County the alignment of certain portions of the earthwork and the rising sun on the winter solstice or first day of winter is a very observable fact as is the setting sun on the summer solstice or first day of summer at the Serpent Mound in Adams County. The marking of the change of seasons is a long held tradition of cultures throughout time and in all parts of the world so why should the ancient inhabitants of the Ohio Valley be any different. Agricultural societies no doubt used such events to track the planting, growing and harvesting seasons.

We mark the beginning of the year on the first of January, very close to the winter solstice, but since we have printed calendars and spend an inordinate amount of time indoors we dont seem to realize it. To the ancient Sumerians and other cultures of the ancient Near East the beginning of the new year typically coincided with the Autumnal Equinox. It is the end of the harvest and a time for thanksgiving, for honoring ancestors and the beginning of the dark time as now there are more hours of darkness in a day than there are of light. In a manner of speaking it’s all about life, death and renewal: to make an accounting and reflect upon the milestones of the past year and to look optimistically toward the future. The sun or the moon or a certain star appears to travel to a particular point along the horizon where its journey ends, its cycle completed. It might travel on as a different character or it might begin its journey anew, traveling in the opposite direction as a completely different entity. Its why we celebrate our birthdays, the New Year and other anniversaries with particular pomp and circumstance.

The average observer might be surprised to know just how many of our annually celebrated holidays have their roots in or otherwise coincide with celestial events. One of the less noted observatories of the change of seasons constructed by ancient Ohioans is located just above the confluence of the Ohio and Muskingum Rivers at Marietta in southeast Ohio. On the first day of winter each year the sun sets along the projected axis of a remarkable part of the Marietta Earthwork group known as the Sacra Via. Interestingly enough its not aligned to where the sun would set on a level landscape but rather the ancient builders compensated for topography and aligned the earthwork to where the sun sets over Harmar Hill, a high ridge on the west side of the Muskingum River. 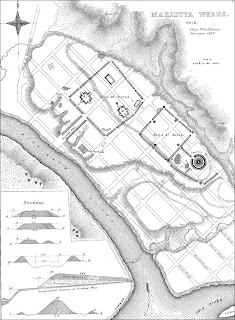 The Marietta Earthworks are or were a combined set of two large segmented square enclosures that pretty much occupied the same space as the town of Marietta does today. Although the age of certain aspects of the Marietta works have remained for years a point of contention among archaeologists, the earthworks as a group almost certainly date to Ohios Middle Woodland or Hopewell period. One can only imagine what went through the minds of Rufus Putnam and Manasseh Cutler when they and their fellow New Englanders landed at the mouth of the Muskingum River in the late 1780s and found the site of their future settlement had already been occupied untold centuries earlier by a sophisticated but long vanished race. The fact that they did not really understand the nature of the monuments they were witness to did not in the least deter them from respecting those that came before them.

On July 4, 1788, in an act of remarkable foresightedness, the founders of Marietta enacted the first historic preservation laws in the United States and set aside certain elements of the Marietta group with some public land attached to each for the wonderment and enjoyment of future generations. This task has since been overseen by the Marietta Town Council. In the manner of the Classicism of the late 18th Century, the New Englanders bestowed names from Roman antiquity to the individual works. These include Conus, the large conical burial mound now the centerpiece of the Marietta town cemetery, Quadranau, the large rectangular flat-topped mound in Camp Tupper Park, Capitolium, the smaller rectangular flat-topped mound (the home of the Washington County Public Library and the subject of a future blog) and the Sacra Via or Sacred Way, one of the most uniquely designed earthworks of the Hopewell period.. 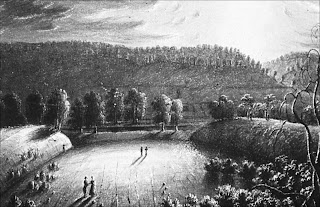 The Sacra Via was a ramped passageway extending some 680 feet from the larger square on the upper terrace to near the eastern bank of the Muskingum River. The passageway, 150 feet wide at the floor descended toward the Muskingum River on a consistent grade with the center slightly crowned like a modern boulevard to apparently aid the runoff of rain water. This feature is subtly conveyed in the accompanying 19th century Charles Sullivan charcoal rendering of the Sacra Via. The entire length of the passage was flanked by a set of sculpted or shaped parallel walls said to have been made of bright red clay and measuring a staggering 230 feet between their summits. As a grand processional way this elaborate ceremonial avenue certainly must have been a sight to behold in its pristine form. These walls are represented as the two bold lines between the river and the larger square on the map of the Marietta Earthworks as published in 1848 by Squier and Davis in Ancient Monuments of the Mississippi Valley. While parallel walls are common elements of many of the larger geometric earthworks, those at Marietta are or more properly were much different. Beginning just above grade at the terrace edge near the larger square they maintained this elevation or close to it the entire length of the passage. At the foot of the passage the walls were said to have measured more than 20 feet in height. The Sacra Via terminated a couple hundred feet short of the east bank of the Muskingum which in the 19th century and before riverbank development and navigation locks was 35 to 40 feet above the present flow of the river.

In Ancient Monuments Squier notes that it had been conjectured by some that the Muskingum River once flowed immediately at the base of the passage way. “If accepted without evidence”, he went on to say, “would mean that for the river to have cut that deep the earthwork had to have an antiquity greater than that of the Great Pyramids of Egypt”. It isn’t known just exactly how ancient Ephraim Squier thought the Pyramids were but he may have been at least somewhat closer to the truth than he realized. Drawing on the military vernacular of the 18th into the 19th centuries, the Sacra Via was early on referred to as the covered (or covert) way or a set of parallel walls used to maintain a line of communications on a battlefield or in a fort-like setting. But seeing that the walled squares of the Marietta earthworks were neither forts nor the scene of a great battle this term was really not applicable.

As with the large Conus mound now in the town cemetery and the two flat-topped mounds, Quadranau and Capitolium, located within the larger square it was the original intent of the founders of Marietta to preserve the Sacra Via. Unfortunately about the mid 1800s a brick maker was elected to the town council and the clay walls of the Sacra Via soon became the bricks used to build a large church in downtown Marietta. Apparently trading one sacred space for another seemed a fair exchange at the time. Today the Sacra Via is still visible as a very nice and a very Victorian looking parkway, preserving at least a flavor of what came before it. 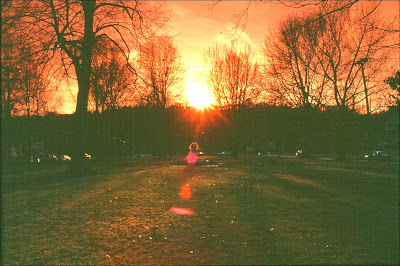 If the weather is clear and youre in the vicinity at the proper time take a moment to appreciate a once a year event using a solar observatory conceived of in the minds of ancient Ohioans perhaps two millennia ago. Even if it is a couple of days either side of the actual event the occurrence is inspiring. As an added attraction this year the sunset will be accentuated by a lunar eclipse. It can only be imagined what they would have thought about that!