Investigations at the Great Circle

Investigations at the Great Circle 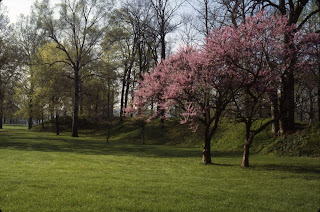 A series of limited archaeological investigations are planned at the Great Circle Earthworks for the coming weeks. The Great Circle is, of course, one of the best preserved remnants of the Newark Earthworks, which was the largest set of geometric earthworks built by the ancient Hopewell culture between about 100 BC and AD 400. The goal of the project is to look for any archaeological evidence that might be in the footprint of a proposed leach bed intended to alleviate flooding problems in the parking area of the Ohio Historical Society’s maintenance building on Cooper Avenue. Unfortunately, it is not presently feasible to tie the drainage system into the Newark City sewer and that’s why a leach bed is needed.

Initially, we’ll be doing a remote sensing survey of the area. Techniques, such as magnetic surveys or ground penetrating radar will allow us to “see” beneath the ground surface without doing any digging. Later, we plan to dig several small test pits to search for artifacts, like flint knives and bits of broken pottery, that the remote sensing instruments won’t be able to detect. If any significant archaeological remains are found, they either will be avoided by finding an alternative location for the leach bed, or studied further to make sure no information is lost. The maintenance buildings are located away from the earthworks, so the leach bed will not impinge on them in any way. In the unlikely event that any human remains are encountered, the location of the leach bed will be moved so as not to disturb the burials. 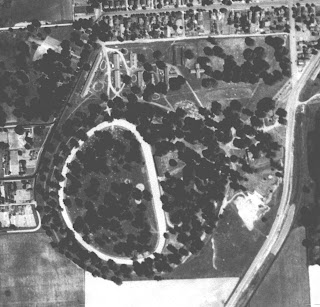 Based on a study of historical records and aerial photographs, we expect to find traces of the hog barn built when the park was the site of the Licking County Fair grounds. There also may be evidence relating to the activities of the Hopewell culture, such as camp sites either for the workers who built the mounds or visitors who came to the earthworks to participate in ceremonies. And, who knows, we may find even older traces of human activity. People have lived in this rich valley for more than 12,000 years! The formal research design for the project is being written and, when completed and approved, will be available on the Newark Earthworks home page: http://ohsweb.ohiohistory.org/places/c08/ .

In the meantime, if you have any questions about the project, please feel free to attend a public meeting scheduled for 3 October from 7-9 PM at the Ohio State University, Newark Campus. Information about the meeting, which also will include discussions about new exhibits for the Visitor Center at the Great Circle, will be posted here on the Archaeology Blog as well as on the Newark Earthworks home page, or you can contact Brad Lepper at [email protected], or (614) 297-2642 for details. For an overview of what archaeologists and historians have learned about the Newark Earthworks, including the Great Circle, go to http://ohsweb.ohiohistory.org/places/c08/pdf/Appendix1_History.pdf.