In the Footprints of Squier and Davis: Archaeological Fieldwork in Ross County, Ohio

In the Footprints of Squier and Davis: Archaeological Fieldwork in Ross County, Ohio 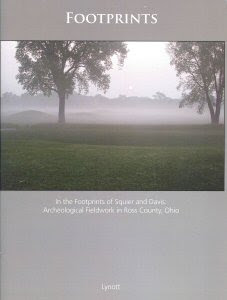 Announcing a new work on Ohio Hopewell Archaeology! The Midwest Archaeological Center of the National Park Service has just released a compilation of reports on archaeological field work done in Ross County over the past several years. The volume, edited by MWAC director Mark Lynott, is an outgrowth of the In the Footprints of Squier and Davis symposium presented at the 68th Annual SAA Meeting held in Milwaukee, Wisconsin. The focus of Footprints is to see how far (or not) archaeology and preservation has come in the so-called core area of the Hopewell phenomenon in Ohio since the publication of Ephraim Squier and Edwin Daviss landmark volume Ancient Monuments of the Mississippi Valley a century and a half ago; what have we learned since then of how the people we call Hopewell conceived of and constructed their great mounds and geometric earthworks.

Even in their time Squier and Davis were apprehensive on what the future held for the great mounds and earthworks that seemed to some as an endless commodity in Ross County. What, if anything they must have wondered, would be left for subsequent generations to study and admire or would anyone really care. Contributions in the volume run the gamut off topics from reports on attrition to ancient sites due to land use and development to complex investigations of surviving geometric earthwork sites using the most modern of remote sensing instruments. One thing that will quickly become obvious to the reader (although likely lost even on Squier and Davis) is that construction of the often expansive geometric earthworks was just exactly that construction. That is, following design and purpose using conventional themes, materials and techniques to create a desired form. It certainly isnt the random massing of miscellaneous soils just to create berms sufficient to divide social spaces.

The format of Footprints is broken into 12 very easy to read chapters authored by some of the foremost scholars presently involved in Ohio Hopewell Archaeology, each chapter representing work at individual sites. Hopefully Ephraim and Edwin would find it a worthwhile endeavor. Copies can be obtained from the Midwest Archaeological Center in Lincoln, Nebraska and likely soon on line and /or from the bookstore at the Hopewell Culture National Historic Park (Mound City) just north of Chillicothe.