As part of the celebration of the 225thanniversary of the founding of Marietta, the Campus Martius Museum is featuring an exhibit of spectacular murals painted in 1935 by William Mark Young (1892-1948) for the City of Marietta. The series of murals features landmark historic events in the history of Marietta. The highlight of the exhibit for me is the “Mound Builder” mural. It features a highly romanticized view of a visiting dignitary, clad in a glorious feathered cape, approaching the Marietta Earthworks, one of the grandest ceremonial centers of the ancient Hopewell culture. He stands in his canoe, normally an ill-advised procedure, as it approaches the dock where parallel earthen embankments lead from the river to the monumental earthen enclosures. 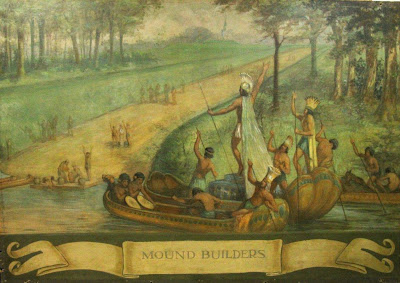 The Campus Martius Museum provides the following description of the mural:

“In the foreground, William Mark Young depicts the Sacra Via or ‘Sacred Way,’ a ceremonial highway leading from the Muskingum River to the Quadranaou Mound, seen in the background. Beside the Quandranaou Mound stands the Conus Mound, currently the site of Mound Cemetery. …Rufus Putnam, a founding settler of Marietta, described the local Mound Builders as people of ‘ingenuity, industry, and elegance.’ A surveyor and engineer himself, he had a great appreciation for the architects of such impressive structures.

In this mural, Young channels Putmans high regard for the Mound Builders. He focuses the majority of his attention on depicting the people themselves, and not just their earthworks. It is a work of sheer imagination, and the Mound Builders hold center stage. A party of moundbuilders in elaborate canoes and costumes has come to the Sacra Via, perhaps for a religious pilgrimage. … In combining both ancient and modern elements, Young presses his viewers to imagine Marietta as a home to vibrant civilizations both in the past and in the present.”

Accompanying the various murals are an assortment of artifacts from the historic periods represented. The case dedicated to the Mound Builders contains prehistoric artifacts from local private collections, a copy of Putnam’s sketch of the Marietta Earthworks, a copy of ‘A Bird’s Eye View of the Ancient Works on the Muskingum,’ and an early photograph of Mound Cemetery.

My biggest problem with the painting is the portrayal of the caped figure as if he were a king or a great chief with slavish minions fit to paddle his canoe, but not to gaze upon his magnificence. Such lords may have stood atop the great temple mounds of the Mississippian era — but our best evidence now indicates that Hopewell leaders were “first among equals,” rather than in any way king-like. Young, however, could not have known this in 1935.

What the painting lacks in strict attention to historical details it makes up for in its exuberant celebration of Marietta’s ancient grandeur. And I agree whole-heartedly with the idea that the great Hopewellian ceremonial centers, such as Newark, Fort Ancient, and Marietta, were places of pilgrimage. Most importantly, however, is the very fact that Young and the City of Marietta chose to include Ohio’s Native American heritage in this series of murals and that the citizens of ancient Marietta are not depicted as naked savages inhabiting a howling wilderness.