Johanna Minich is a Pre-Columbian Art Historian. Her 2004 dissertation, Hopewell Stone Carvers: Reinterpreting the Roles of Artist and Patron, is an insightful study of the magnificent Hopewell effigy pipes from Mound City and Tremper Mound.
I have known Johanna since 2006 when we began working together on the Hopewell Iconographic Workshop, hosted by Kent Reilly at the Center for the Arts and Symbolism of Ancient America, Texas State University, San Marcos, Texas.
In preparation for my upcoming talk on the “Indigenous Art of Ancient Ohio,” I asked her whether it was valid to use the term “art” for artifacts created by non-Western cultures and particularly prehistoric societies where the intended meanings of artifacts either have been lost entirely or are, at best, much less obvious.
I am happy to share her thoughts in this guest blog post.
_____
Art is a word used to describe the array of material remains from New World peoples and is a concept that is embraced with varying degrees of enthusiasm by scholars. Some of the common arguments against the use of this term are 1) non-Western creative output is really so different from “traditional” art forms, how can it be considered the same? and 2) it imposes a Western perspective of what art is onto people who may or may not have shared that view.
I think its instructive to break down these two points and see where the perspective might be skewed. 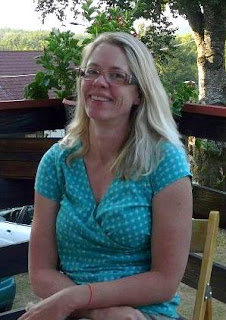 It is a matter of contention among art historians for a long time that certain cultures are privileged in our program of study over others. We term everything that did not have a direct effect on the collective Western aesthetic as “non-Western,” meaning of course, everything ever produced by anyone, at any time, that came from anywhere besides Europe. The Ancient Near East and Egypt are also included in the study of Western art, but why? They wrote things down, and they kept records. So it would seem that what we really place the most importance on is a cultures ability to maintain written records about themselves. New World cultures such as the Maya, we now know, kept extensive and detailed records.  However, these werent discovered or understood until the art historical canon had already been set in stone.
Art historians are trained to look at the big picture in terms of artistic production.
Who made it? In the case of non-Western material output, we are looking at objects crafted, for the most part, by people whom we dont know much about. Does that negate it as art? Arguments about defining what art is from a Western perspective, in my opinion, are useless here. I agree that we make aesthetic judgments from our cultural perspective but by saying “we cant call it art,” we are in effect saying “these people are less human than we are.” Humans make art. It really matters very little if we like it, hate it, or even understand it, as long as we accept that basic premise.
What are we looking at? The vast majority of objects that survive in an archeological context from prehistoric cultures are objects that we are more comfortable defining as craft. This includes ceramics and carved stone. How do we differentiate between that which is described as craft and that which is considered “fine art”? Maybe it would be easier to use material as a starting point. We are quick to define ceramics, particularly indigenous pottery, as craft. If we turn back to our art history textbook for some guidance, we find pages of beautiful, full-color, Greek pottery. The Greek mastery of black-figure and red-figure techniques, combined with their use of detailed narrative, later inspired Renaissance and Neo-Classical masters. Ceramics are fine art. The Ohio River Valley produced some of the greatest prehistoric stone carvers on the North American continent. But stone carving is a craft, right? Michelangelo didnt think so. 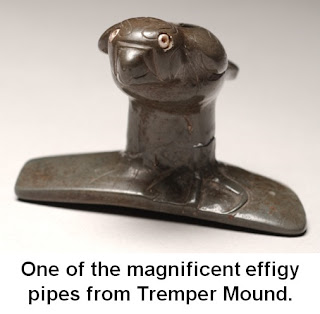 Why is the object created? This is question that reaches deeper into the heart of the issue. Is the impetus for non-Western production of things so much different from the Western?  F. Kent Reilly introduced the idea of how material objects are capable of embodying the social and cultural phenomena developed during the ancient period. He writes:
“The function of art as a material expression of cultural (and therefore mental) constructs is a well-documented phenomenon among ancient civilizations as well as contemporary small-scale societies. A common characteristic of such societies is the construction of analogies between the social order and the natural world, expressed in religious beliefs and practices (i.e., ritual) and given tangible form in art.”
In short, art has always served the religious, political, sexual, and economical needs of the cultures that produced it. The material remains of cultures around the world give testament to both the individual desire and the collective ideal.
Johanna Minich
Posted May 10, 2013
Topics: Archaeology