HOPEWELLIANS: THE PEOPLE BEHIND THE INTERACTION SPHERE

HOPEWELLIANS: THE PEOPLE BEHIND THE INTERACTION SPHERE

In her unpublished Ph.D. dissertation, Biological affinities among Middle Woodland populations associated with the Hopewell Horizon, Elizabeth Pennefather-O’Brien explores the biological relationships between and among the varieties of Hopewell culture across eastern North America. Termed “traditions,” these varieties include the Scioto Hopewell in southern Ohio, Havana in Illinois, northern Missouri, Wisconsin, northwestern Indiana and southwestern Michigan, Crab Orchard in southern Illinois, southern Indiana and western Kentucky along the Ohio River, and Marksville in the lower Mississippi River valley. Pennefather-OBrien looked at crania (skulls) from sites in all of these regions. 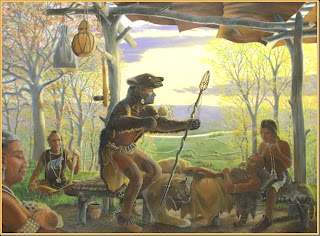 For example, the Albany Mounds, Klunk Mounds and Utica Mounds from the Havana region, Crooks Mounds in the Marksville region, and the Hopewell Mound Group and Turner Mounds in the Ohio Scioto region. By studying subtle variations in features of these crania, Pennefather-O’Brien was able to compare them from region to region and develop estimates of “biological distance,” or degrees of relationship. Biological distance studies generally show that groups tend to be isolated by geographic distance, which simply means that, in general, the farther apart two groups are the less they tend to interact with one another. Therefore, all other things being equal, the farther you are from someone, the less likely it is that you will be closely related. Pennefather-OBrien determined, however, that the typical isolation by geographic distance model does not fit with the Middle Woodland Hopewell Horizon associated samples. Surprisingly, some widely separated Hopewell groups were more closely related to each other than they were to other groups that lived closer to them. Pennefather-OBrien found that samples from Utica Mounds and Klunk Mounds, both Havana sites, and Turner Mounds from the Scioto region are not statistically different, suggesting that these groups may have originated from the same population or are genetically similar because of maintained social and biological interaction.

In addition, she found that In general, there are fewer significant differences between sub-groups for females than there are for males, indicating that there was much more similarity among the females and perhaps patrilocality was practiced. This means that Hopewell men tended to stay in the areas where they were born while women tended to move to go live with their husbands. For example, females from Albany Mounds were not significantly different from the females at Turner Mounds and Utica Mounds. And females from the Hopewell Mounds were more similar to females from Crooks Mounds and Klunk Mounds. One interpretation of this observation is that women from the Havana and Marksville regions may have been coming to Ohio to marry Scioto Hopewell husbands.

Pennefather-OBrien also compared the relationship between biology and status as measured by burial in a tomb with lots of mortuary offerings. She found that In general, tomb associated and non-tomb burials from the same site are not significantly different from one another, with the exception of the two sub-samples from Turner Mounds. These two sub-samples appear to originate from or represent different populations In other words, at most Hopewell sites, high status individuals came from the same population as lower status individuals. This indicates that the big shots weren’t missionaries from other regions and there wasnt a caste system that kept high class folks from marrying lower class folks. Something different, however, is going on at the Turner site where the high status people buried in tombs seem to be different from the people given less sumptuous burials. Determining what’s going on here will be a fascinating problem for further study. Pennefather-OBrien concludes that sites within the recognized regional traditions of Ohio Scioto, Crab Orchard, and Marksville are related to one another biologically and not just culturally. This means that the Hopewell Interaction Sphere involved more than the movement of exotic raw materials and marvelous works of art. People regularly moved between and among these distant regions — perhaps as pilgrims making periodic visits to the great ceremonial centers.