It is becoming increasingly clear that many of Ohio’s ancient earthworks incorporate alignments to astronomical phenomena, such as the apparent rising and setting of the Sun on the summer and winter solstices and the various moonrises and sets that demarcate the complicated 18.6-year-long cycle of the Moon. A still unanswered question is why ancient people were so fascinated with these astronomical events. They certainly would provide a precise and convenient means of keeping track of time, but there is evidence that humanity’s interest in these celestial rhythms goes back tens of thousands of years. Why were these early cultures so interested in having such an accurate calendar?

Simon Fraser University archaeologists Brian Hayden and Suzanne Villeneuve offer a compelling hypothesis in their article “Astronomy in the Upper Paleolithic?” published in the Cambridge Archaeological Journal. In order to get a handle on why ancient hunters and gatherers would have been so focused on the sky, Hayden and Villeneuve decided to look at historically-documented hunters and gatherers to see whether these relatively recent groups had similar interests and, if so, why. They examined data concerning 79 complex hunter-gatherer societies and discovered that 63 of them (80%) exhibited some solstice observation or monitoring and/or calendars” and, surprisingly, most often the monitoring related to the Moon. 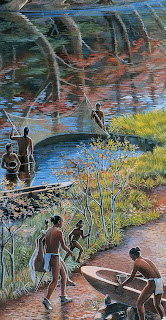 Complex hunter-gatherers are groups that rely on hunting wild animals and gathering wild plants for a living, but live in highly productive environments that permit them to gather a reliable surplus of food. This surplus allows them to have relatively high population densities, live at least seasonally in sedentary communities, engage in trade of high prestige artifacts, and compete with one another in the holding of extravagantly sumptuous feasts. Hayden and Villeneuve argue that their great interest in astronomy was fueled by the need to schedule these feasts, which could be complicated affairs with enormous social implications. The Hopewell culture practiced some horticulture, but the people relied principally on hunting and gathering for the bulk of their diet. As a result, they share many of the characteristics of complex hunter-gatherers. Their monumental earthworks with astronomical alignments may have been pilgrimage centers operated by secret societies that competed with each other for prestige as well as religious or political authority. Holding big feasts within an impressive architectural arena on occasions featuring dramatic astronomical conjunctions would have been one way to demonstrate your groups’ superiority on many levels.

Hayden and Villeneuve write, “If secret-society knowledge encompassed sophisticated solar, lunar and other celestial observations and knowledge, we might expect the highest-ranking members of secret societies to actively seek out ways to develop even more secret knowledge based on understanding celestial movements such as cycles of lunar or solar eclipses.” The initiation of such a spiritual arms race may have been the spark that ignited the explosive Hopewell florescence.

For further discussion of this topic, check out my column in the Columbus Dispatch: http://www.dispatch.com/content/stories/science/2011/12/18/earthworks-created-for-more-than-farming.html

Here is the full reference for the paper by Brian Hayden & Suzanne Villeneuve 2011 Astronomy in the Upper Paleolithic? Cambridge Archaeological Journal 21(3):331-355.

For an extended discussion of the astronomical alignments at the Hopewellian Marietta Earthworks, see this previous blog post: It’s That Most Wonderful Time Of The Year http://ohio-archaeology.blogspot.com/2010/12/its-that-most-wonderful-time-of-year.html