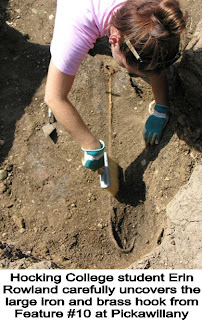 One of the more surprising objects recovered by Hocking students during the 2011 archaeology field school at Pickawillany was a large iron and brass hook. At a level just above the bottom of Feature # 10 the metal detector indicated what was thought to be a series of smaller individual metal objects. Careful excavating by students Erin Rowland and Chloe Sampson revealed a large hook-shaped object nearly 40 inches long. Looking like an oversized fish hook it was made of at least 3 shorter lengths of round iron stock hammer welded together to make a single bar with a relatively small 2 inch diameter loop or eye at the proximal end. The approximately lower one fourth of the hook was fashioned from what possibly might be round brass stock that looked to be fitted to a socket at the end of the iron portion. The tip of the hook was tapered but blunted so that the very tip was not overly sharp. It was probably the combination of two different metals that caused the metal detector to give conflicting readings. 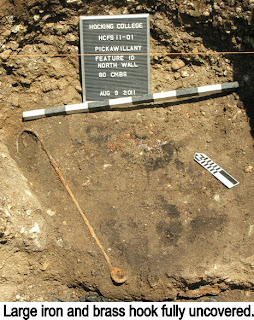 What was the hook used for? To hang animals while they were field dressed and the hide removed? Possibly. The dull point would lessen the chance of the hook tearing through the animal’s hide. Perhaps it was a grappling hook of sorts that was fastened to a rope and thrown ashore from a boat or canoe as it was landing or perhaps from the shore to a boat to accomplish the same thing. Who’s to say? Maybe it was just something made by a blacksmith at Pickawillany and only he knew what it was all about. My father was a highly skilled craftsman that could make just about anything out of metal and often quickly fashioned things for a specific purpose that might be used only once or twice before taking up permanent residence in the barn – so to speak. Perhaps it was one of those. At any rate it appears to have outlived its usefulness and ended up in the bottom of a refuse pit. 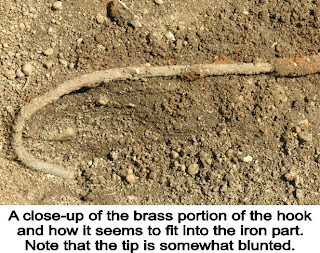 Besides the hook, Feature #10 contained the leg hold trap previously posted as well as blade of a folding knife, a French fusil butt plate, several gun flints, a number of glass trade beads and a quantity of animal bones. There was also another object recovered that will be discussed in a later posting. Feature #10 was remarkable for the variety of objects recovered. It is one of a cluster of pits all containing black-smithy type items and may in fact indicate the location of the blacksmiths area at Pickawillany. The answer to that question awaits further research. If a reader has an idea of what the hook was all about please drop us a line.