In the twilight of his career, Henry Shetrone, former Curator of Archaeology for the Ohio Historical Society and later its Director, reflected on “one-third of a century’s inquiry into Ohio’s prehistory.” The manuscript, entitled Ohio Archaeology and Archaeologists, unfortunately was never published, but it is preserved in the archives of the Ohio Historical Society.
The following excerpts are from Shetrone’s account of the excavation of the Tremper Mound where he “takes the liberty of reminiscing informally about … an outstanding experience of which he was very much a part.”

It was the early summer of 1915… Shipment of camping equipment, tools and personal belongings by slow freight to the nearest railroad station; hiring a farmer to “haul” the outfit to the Tremper farm; setting up camp in a nearby grove; wives of the Curator and his assistant; a young surveyor and a college student, comprising the exploration party… Then followed the rainiest season on record for the locality… clothing, cots, shoes, everything damp and moldy for weeks, but spirits unflagging, sustained by pleasurable anticipations of things to come! 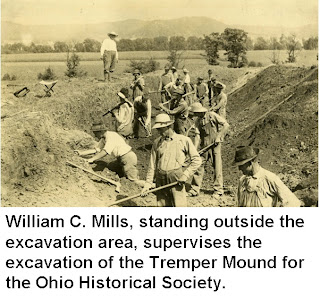 No time was lost in assembling a force of laborers and beginning exploration. …
While some sort of “finds” were expected daily, three long weeks passed with nothing more than … post-molds, stretches of carefully prepared floor, and two small deposits of cremated human remains, without artifacts! This, together with continuous rains and flooded trenches was not conducive to cheerful attitudes, either of the explorers or of the ladies back at camp, who struggled valiantly to keep the home fires burning and food prepared for weary workers…

Came a day when a workman called, “Hey, Boss, here’s a lot of funny looking burnt stuff and stones.” The author hurried to the spot with trowel and whisk broom, and in a few minutes uncovered a beautiful platform tobacco pipe, fashioned in the image of the quail — Bob White! During the remainder of the afternoon several additional effigy pipes were removed, with still others in view. That evening, until after midnight, the assistant curator, the surveyor and the college student kept silent and awesome watch lest intruders disturb this ancient treasure. All of the next day was required to remove the more than 500 artifacts from the “cache,” 136 of which were tobacco pipes.

The ceremonial or sacrificial offering occupied a space on the mound floor approximately six feet across… Most of the specimens had been intentionally broken… Fortunately, with few exceptions, all parts were recovered and afterwards restored by the museum technician. …
The artistry displayed in fashioning these pipes is not surpassed in any prehistoric culture north of Mexico.

The magnificent Tremper pipes can be viewed at the Ohio Historical Society’s exhibit “Following in Ancient Footsteps.”