HENRY SHETRONE AND THE MOUND-BUILDERS

HENRY SHETRONE AND THE MOUND-BUILDERS 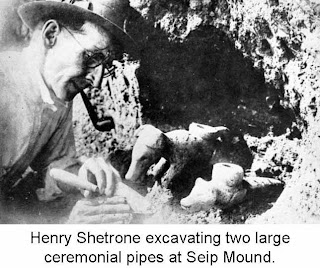 Henry Clyde Shetrone was a Columbus newspaper reporter who became one of Ohio’s most productive archaeologists. Between 1921 and 1928, he was the Curator of Archaeology for the Ohio Historical Society and served as the Society’s Director from 1928 until 1947. He died in 1954, but he left a legacy of great achievements in archaeological research, preservation, and public education.

He was born in Millersport in 1876 and served in Cuba during the Spanish American War. He came back to Ohio and eventually became a reporter. He wrote stories on archaeology and became good friends with William C. Mills, then Curator of Archaeology at the Ohio Historical Society. In 1913, Mills offered him a job as a staff archaeologist. Shetrone conducted archaeological investigations across the state and made many contributions to our understanding of Ohio’s ancient cultures. He unearthed many of the most extraordinary artifacts displayed in the Ohio History Center’s new exhibit “Following in Ancient Footsteps,” but he did more than excavate sites. He also took the lead in preserving sites for future generations.

A partial list of the sites acquired by the Ohio Historical Society during Shetrone’s tenure as director includes Fort Hill, Leo Petroglyph, Flint Ridge, the Newark Earthworks, Seip Mound, Shrum Mound, and Williams Mound. Shetrone was the last of the great self-educated professional archaeologists. He never graduated from college, yet he was one of the most prolific archaeologists of his generation. Although flawed by today’s standards, many of his contemporaries regarded his field techniques as superlative. Clark Wissler, one of America’s foremost early anthropologists, wrote that “Shetrone does not dig a mound, he dissects it as carefully and intelligently as a surgeon approaches a complicated internal structure.” Shetrone published many articles on his research, but his greatest published work was his 1930 book entitled The Mound-Builders.

A few years ago, the University of Alabama Press reprinted this book as part of their “Classics in Southeastern Archaeology” series, so it’s widely available again. I contributed the introductory essay on Shetrone’s life and work. 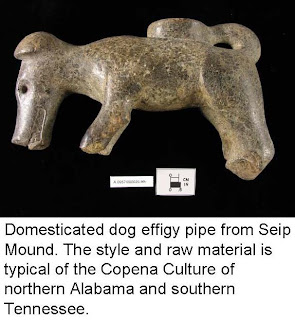 Although Shetrone’s views on mound-builder archaeology certainly are dated, The Mound-Builders remains an historically important synthesis of the state of the art as of 1930. It is extensively illustrated and his descriptions of excavating at some of Ohio’s most famous archaeological sites are well worth reading. Shetrone dedicated the book to “the average man and woman who, lack the time and opportunity for digesting the rather extensive but often unavailable literature on the subject.” The Mound-Builders is a fitting testament to Shetrone’s contributions to archaeology and to the ancient people whose achievements he worked so hard to understand, preserve and share with the world.