Charles Darwin’s contributions to our understanding of where we’ve come from stand unmatched for their precocious insight and explanatory power. Yet he was not overly sanguine about the ability of archaeology to shed light on the human past at least not in February of 1862, when he responded to a letter from Charles Kingsley with the following statement: 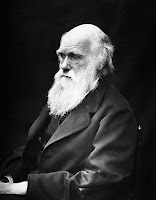 “It is indeed, as you say absurd to expect a history of the early stages of man in prehistoric times.”

In fact, Jacques Boucher de CrÃ¨vecur de Perthes in France, Ephraim Squier in the United States, Daniel Wilson in Canada, John Lubbock in England, and many others already were cobbling together the science of archeology, which has allowed us to write a remarkable “history of prehistoric times” admirably summarized in recent books such as World Prehistory: a brief introduction by Brian Fagan and The Human Past: World Prehistory and the development of human societies, (a not-so-brief introduction) edited by Christopher Scarre. But in 1862, who knew what a powerful tool archaeology was to become for uncovering the secrets of our past?

In fairness to Darwin, when Lubbock’s book on Prehistoric Times, was published in 1865, he read it with much enjoyment and wrote to Lubbock that it was “an admirable and profound discussion.” Actually, that’s another wonderfully charming characteristic of Darwin. He could admit his mistakes cheerfully. In a letter to Charles Lyell, he referred to his ideas on the formation of the terraces of Glen Roy in Scotland. (Darwin had thought they were marine terraces formed by the rising and falling of sea levels, but was persuaded by the work of the young geologist Thomas Jamieson that the terraces were formed by glacial action.) Darwin wrote that Jamieson “has removed all my difficulties & that now & for ever more I give up & abominate Glen Roy & all its belongings I entirely yield. I believe every word in my Glen Roy paper is false.” What a wonderful model of grace and humility for every scientist to follow! This is how science is supposed to work. In practice, however, it seems that few of us have the strength of character to admit when we’re wrong. Still, it’s more common among men and women of science than in almost any other field of human endeavor.

There’s no better way to celebrate Darwin Day than by perusing the correspondence of Darwin. There are many delightful gems like the ones I’ve quoted in this brief note. Thanks to the Darwin Correspondence Project [https://www.darwinproject.ac.uk/], you can do a lot of perusing from your computer.