HAMMER THAT STARTED A WORLD WAR FEATURED ON NBC4 NEWS

HAMMER THAT STARTED A WORLD WAR FEATURED ON NBC4 NEWS 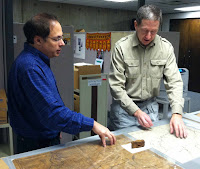 NBC4 meteorologist Ben Gelber came to OHS to report on the discovery of the iron head of a blacksmith’s hammer at the archaeological site of Pickawillany, now part of the Ohio Historical Society’s Johnston Farm & Indian Agency. In the summer of 2011, archaeology field school students from Hocking College in partnership with OHS archaeology staff, discovered the hammer as part of their on-going research project at the site. The hammer is an iconic artifact that represents, as much as any single artifact could, the essence of historic Pickawillany. 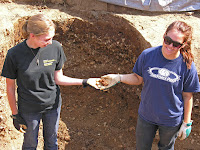 In the summer of 1752, the Miami Indian village of Pickawillany was, according to the English explorer Christopher Gist, “one of the strongest Indian Towns on this Part of the Continent.” In 1751 he wrote that it consisted of four hundred families and was daily increasing. Pickawillany had become such an attractive location due to the presence of English blacksmiths who provided better quality and cheaper merchandise than the French. And, unlike the French, they could provide onsite “tech support” for the European muskets and other trade goods so valued by the Miami and other tribes of the Ohio country. On June 21st 1752, a large force of Ottawa Indians and Frenchtroops attacked Pickawillany killing or driving off its inhabitants. Some consider this the first battle of the French and Indian War. So, in a way, this hammer started a world war. 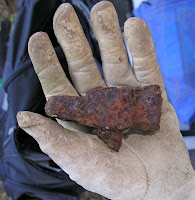