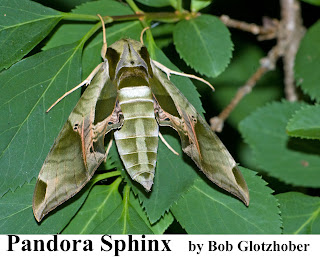 Earlier this week in part I of this blog, I talked about some of the 1,200 known species of sphinx moths members of the family Sphingidae. As noted, common names for these typically include sphinx moth or hawk moth while the caterpillars are often called hornworms. One of the more beautiful members of this fascinating family is the Pandora Sphinx, which I discussed in Part I.

But I promised that this would also have some connection to Halloween. What possible relationship can there be between sphinx moths and Halloween?

My volunteers and I recently came across an infamous moth in our collections. This very large sphinx moth has long been associated with the supernatural and evil. Not long ago, this species was featured in the movie, The Silence of the Lambs. It was mentioned in Bram Stokers Dracula, and was a symbol in the artwork of the Japanese metal band, Sighs Hail Horror Hail album.

Aside from their looks, if disturbed this moth can actually expel air from its pharynx producing a loud squeak accompanied often by flashing their brightly patterned abdomen! That alone might have led to the moths ignoble reputation, but its appearance was even more important. Edgar Allen Poe even wrote a story about this moth, in his story Sphinx (though he used an antiquated taxonomy for it). 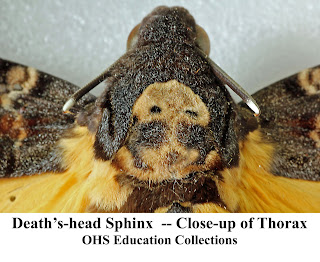 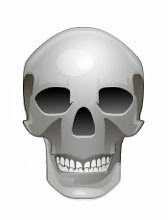 So who is this infamous member of the Sphingidae family the one with a reputation of evil and supernatural? Its the Deaths-head Sphinx Moth, or Deaths-head Hawk moth, Acherontia atropos. The name, obvious when you see one or its photo, comes from light yellow or whitish pattern in the darker background of the thorax. The pattern looks very much like a skull such as the skull of pirates skull and crossbones.

The adult moths often feed on honey in beehives. Interestingly enough, they have developed one or more methods to protect themselves from attack from the bees which are normally quite aggressive to intruders. 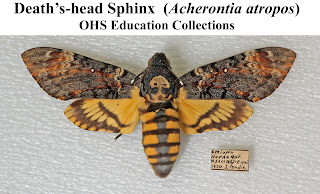 Some scientists think their high-pitched squeak may mimic the piping sounds of a queen bee, upon which worker bees freeze momentarily. Unfortunately, this has never been directly observed in a hive, and once the moth drinks honey, it cannot squeak for as long as 30 minutes. They also have at least four different chemicals that seem to mimic the odor of the bees. Since the hive is dark, scent is very important to bees so they may be scent invisible to the bees. Regardless of which (or both) of these really is at work, these moths move about the hive boldly, the bees accept them readily, even though they are stealing precious hive resources. Of the three species in this genus (all of which host the deaths-head pattern) the one we have illustrated attacks only colonies of European Honeybee, Apis mellifera, which is the species we have domesticated.

The Deaths-head moth caterpillars feed on a wide assortment of host plants, including potatoes, nightshade, peppers, ash trees and other members of the Olive family and Catalpa. The larvae can grow to as much as 4 or 5 inches long, and (like other hornworms) have a large dorsal horn at the rear of their abdomen. They may be yellow or brown, with bold markings. In some cases, the markings may suggest a snake which some workers hypothesize may give them some protection from birds.

The natural range of these moths is the United Kingdom, southern Europe, Africa and the Middle East. However, as honeybees have been introduced to the U.S. and many of their host plants, these strange-looking moths occasionally appear in the U.S.

More information on these fascinating moths is available at the website of the Natural History Museum of Londons website at: http://www.nhm.ac.uk/nature-online/species-of-the-day/evolution/acherontia-atropos/index.html.

Footnote: The specimen we found is part of our education collection and not cataloged, as it was not collected in Ohio. According to the label, it was collected in 1970 by John Condit in Ethiopia, Harar Province on the grounds of the H. Sellassie University.