Fort Laurens Musketball Concentration: Evidence of a fight or fiasco?

Fort Laurens Musketball Concentration: Evidence of a fight or fiasco? 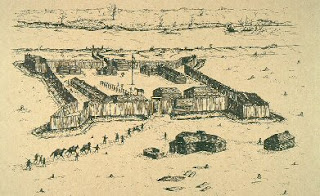 In 2004, Ohio Historical Society archaeologists and dedicated volunteers moved 50,000 lbs of dirt during an excavation of a musket ball concentration at Fort Laurens State Memorial, Bolivar, OH, which is Ohio’s only Revolutionary War period fort (drawing by Doug Angeloni). The concentration was located during a 1999-2000 survey of the Memorial property conducted by the Center for Historic and Military Archaeology (CHMA), Heidelberg University, Tiffin, Ohio. The purpose of the OHS project was to discover the nature of the musket ball concentration and possibly determine if it was the result of one of two very notable and somewhat connected events that took place at Fort Laurens before its abandonment in August of 1779. The first of these was an ambush and massacre of a work detail leading to a month-long siege of the fort in the early winter of 1779. The second incident was the disastrous loss of a supply pack train and the much-needed provisions it carried. It would appear that these two incidents alone have come to define the unfortunate history of the outpost.

Fort Laurens was erected in the late fall of 1778 as part of an anticipated American campaign across northern Ohio designed to both neutralize the pro-British Wyandots and put the American army in a position to make a strategic move against the British stronghold at Detroit. The construction was largely completed by early December 1778 and a garrison of about 170 soldiers was left to man to it.

By mid-February 1779, Fort Laurens had been quietly surrounded by a force of 120 Indians led by the loyalist partisan Simon Girty and a small number of British Regulars out of Detroit. On the morning of February 23rd a work detail, sent out to round up stray horses in order to draw firewood, was attacked without warning by an Indian war party waiting in ambush south of the fort. Seventeen members of the detail were killed and two were taken prisoner. The ambush took place close enough to be within view of those in the fort but probably out of the effective range of covering musket fire. Later that day the Indians employed a successful ruse de guerre of continually moving single file in a large circle through the prairie where the ambush had taken place before passing behind a small hill. After again emerging into the open, the Indians would once more fall into line and rejoin the procession. This apparently went on long enough to convince those in the fort that they were facing an enemy whose numbers approached 850 warriors. Fearful for their own safety, those in the fort were either unwilling or unable to come to the aid of the ambushed detail and the dead soldiers were left where they had fallen. The investment of the fort by the Indians continued for another month through a particularly brutal winter and reduced the besieged garrison to the point of exhaustion and near starvation.

The second critical event in the forts history occurred four weeks after the ambush, on March 23rd as a relief column headed by General McIntosh finally reached Fort Laurens. In celebration of the supply details arrival, a number of the forts soldiers fired their muskets in a salute volley or feu de joy. A distinct and unanticipated effect of the gun fire was to startle the pack animals, causing them to bolt and scatter the much-needed supplies in all directions from the fort. Ironically, the Indians had quietly broken off their siege for lack of provisions and had removed themselves from the vicinity of the fort nearly a week before. McIntosh was appalled at the lack of discipline shown by the forts garrison and the spectacle of the pack train stampede. He angrily ordered the lost material be recovered before any of the remaining provisions were dispersed or food rations handed out to the garrison. It is unknown how much if any of the scattered supplies were actually secured. 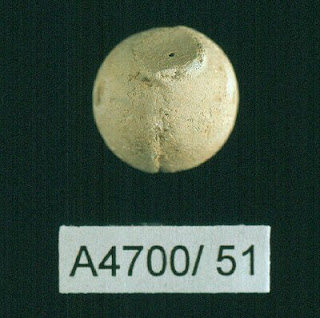 But the question as to which of these events the cluster is associated with still remained. That is until 275 artifacts were recovered from the 6x6m excavation centered around the CMNH concentration. They included 2 metal fragments, 2 projectile point, 2 utilized flakes, 39 debitage, 4 stone artifacts, 3 unidentified chalky objects and 223 lead items. Upon analyzing the lead assemblage from both projects it was discovered that the ammunition was, for the most part, pristine. As an example, picture 2 is a typical .59 caliber ball with casting seam down the center and sprue cut (the cut off excess from the casting process) at the top. Had this been shot, it would not be as round and well defined as it is.

The lead material includes 85 .69 caliber musketballs; 33 .59 caliber rifle/trade gun rounds; 48 .36 caliber buckshot; 37.25 caliber buckshot; 3 .54 caliber spent rifle/trade gun rounds and 71 residuals of the manufacturing process. This coupled with the artifact distribution which has central cluster with residuals fanning down the natural slope and the absence of a manufacturing area close by based on the magnetic resistance testing of several hundred square meters of the southern portion of the property where historic accounts indicate the ambush took place leads us to believe the artifacts initiated from the March 23, 1779 pack animal stampede. 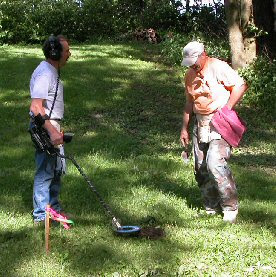