Fort Ancient recently held its first Winter Solstice Sunrise event on Saturday 20 December 2008, one day before the actual solstice. In a fund-raising effort for the site, Charlie and Dee Wright of Indian Hills commissioned Cincinnati-based artist, Mary Louise Holt, to create a painting of an ancient Hopewell Winter Solstice Sunrise celebration at Fort Ancient. Holt had 62 volunteers at the site at sunrise to participate in the event. Boy Scout Troop 36 assisted with gathering brush and placing it on top of the northernmost of the four stone covered earthen mounds that together form a perfect square. The mound had been excavated in 1894 and restored, so no original Hopewell architecture was threatened by this staging of what such an ancient ceremony might have been like. Just before sunrise, the scouts put a torch to the wood on the mound, creating a fire that lit up the morning sky. According to site manager Jack Blosser, “In Native American oral traditions, there is a great sense of balance within nature. When the people saw the sun rising 2,000 years ago, what better to greet the sun with than its brother, fire.” The rising sun was greeted by another ball of flame, creating a balance between the heavens and the earth. 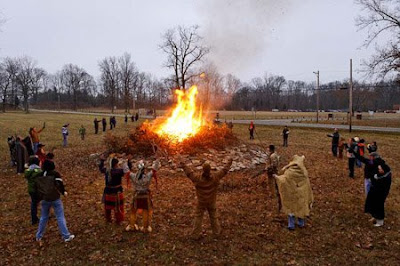 Of course we do not know precisely what sorts of ceremonies were held at this ancient earthwork 2,000-years-ago, but when Warren K. Moorehead, the Ohio Historical Society’s first curator of archaeology, originally excavated the four mounds, he noted that at least one of them was “covered with burnt stone.” This suggests that fire did figure prominently in the rituals that took place here. And the late Patricia Essenpreis and David Duszynski proposed in 1989 that the Winter Solstice Sunrise could be viewed from the northernmost mound through one of the gateways in the enclosure. This supports the idea that significant astronomical events were commemorated in the monumental architecture of the Hopewell.

There has been, for many years, a Summer Solstice Sunrise celebration at Fort Ancient based on the observation by Essenpreis and Duszynski that this pivotal sunrise could be viewed from the westernmost mound through another gateway in the North Fort. That both the Summer and Winter Solstice sunrises appear to have been encoded in the alignments of the Fort Ancient earthworks supports the idea that these seasonal events formed key elements in the ceremonial calendar of the Hopewell culture. December’s Winter Solstice Sunrise event honors the ancient builders of Fort Ancient with a ceremony linking past with present and earth with sky