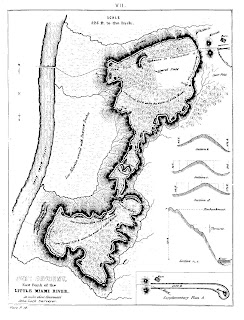 In the 23 October Columbus Dispatch, columnist John Switzer features the Fort Ancient Earthworks and the idea that this grandest of monumental hilltop enclosures was a place of pilgramage for the Hopewell culture 2,000 years ago.

He quotes site manager Jack Blosser who suggests we think of the earthwork as a church but not just any church. The scale of Fort Ancient could accommodate a vast congregation. Three-and-a-half miles of earthen embankments enclose about 100 acres of ceremonial space. This is far more space than would be needed to serve the needs of the local population, so this may have been built for big ceremonies that attracted celebrants from hundreds of miles away. This could explain the wealth of exotic raw materials brought to Ohio Hopewell sites from across North America copper from the Great Lakes, mica from the Carolinas, shells from the Gulf of Mexico, and obsidian from Wyoming. 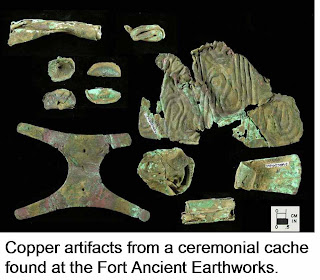 Perhaps these precious materials were offerings brought by pilgrims from distant lands. According to Jean and Joyotopaul Chaudhuri, writing in A Sacred Path: the Way of the Muscogee Creek, the oral traditions of the Creek Indians refer to their ancestors making pilgrimages in the spring and autumn to “special mounds.” The Muskogoee Creek tribe was part of a coalition of tribes that lived in the area now encompassed by the states of Alabama, Florida, Georgia and South Carolina. Perhaps it was their ancestors that brought the mica to the Ohio pilgrimage centers. John points out that ancient DNA obtained from the teeth of a few individuals from the Hopewell Mound Group near Chillicothe has revealed genetic connections with modern tribes from across much of North America from tribes as diverse and widespread as the Apache, Micmac, Ojibwa and Yakima. This is another clue to the cosmopolitan nature of the Hopewell earthworks. People came from far and wide to Fort Ancient bearing offerings of exotic raw materials. Some may stayed and married into local tribes. Others may have returned home with a wife or husband from Ohio. John writes, “Imagine if DNA from other mounds were to be compared. Perhaps other tribes would also be linked to the Hopewell. The importance of Fort Ancient as a place of special power was recognized long past the end of the Hopewell culture at around A.D. 400 and pilgrimages continued into the historic era”.

Warren K. Moorehead, the Ohio Historical Societys first Curator of Archaeology and the person most responsible for the fact that Fort Ancient has been preserved as a public park, recorded a story heard in his youth that the pioneer Simon Kenton often had observed groups of Shawnee Indians visiting the place en route to the Ohio in order to pay homage to the spirits of its makers.

Make your own pilgrimage to Fort Ancient and the other magnificent surviving earthworks built by this great Native American culture. Heres the link to read Johns column in its entirety: http://www.dispatch.com/content/stories/local/2011/10/23/pilgrimage-unearths-hopewells.html The DNA evidence to which John refers is summarized in previous OHS Archaeology blog entries: Ancient DNA from the Ohio Hopewell http://ohio-archaeology.blogspot.com/2006/06/ancient-dna-from-ohio-hopewell.html Ancient DNA from the Illinois Hopewell http://ohio-archaeology.blogspot.com/2006/10/ancient-dna-from-illinois-hopewell.html