In March of 1941, the Ohio Historical Society’s Curator of Archaeology Richard Morgan received a remarkable letter. Employees of Ohios Department of Highways had made what they felt was a momentous discovery. According to a report enclosed with the letter, workers repairing a bridge on State Route 350, near Clarksvillein Clinton County, had uncovered a rock that is evidently the handiwork of prehistoric civilization. 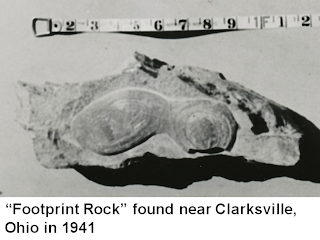 This rock appeared to be in the shape of the bottom of a mocca-sined foot, estimated to be about a size six. The shape of the foot was said to differ from our present civilization in that there is a distinct curve in the foot at the point we know and call the instep. The proximity of the Fort Ancient Earthworks suggested to the author of the report that this piece of work might be a remnant of the Mound Builders art. Morgan looked over the pictures and immediately realized the discovery was not what it appeared to be. In his reply to the Highway Department, he tried to be diplomatic: “In my opinion, the object is not the work of the prehistoric Indians but is a natural rock formation. Such formations are known to geologists as concretions. We appreciate your interest and courtesy in bringing the object to our attention and wish to thank you for your co-operation.” 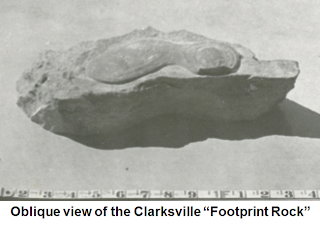 The Footprint Rock sure looks like a human footprint, but it surely is an entirely natural formation. It’s a good example of how easy it is for your brain to fool you by finding apparent meaning in the seemingly infinite variety of nature. There’s even a word for it pareidolia. It’s why we sometimes see a man in the Moon or camels and whales in the clouds.
Brad Lepper
Posted May 21, 2013
Topics: Archaeology