Portions of the following blog entry appeared in the Columbus Dispatch on Sunday 19 May 2009. You can read the published version at http://www.dispatch.com/live/content/science/stories/2009/05/17/digs.html?sid=101  The following text is an enhanced version of the story, with pictures.

Archaeology is a science, but unlike experimental sciences such as physics and chemistry, we can’t go back and “repeat the experiment” by re-excavating a site if we disagree with the original excavator’s conclusions. Thanks to museums, however, archaeological discoveries made decades ago can be re-studied and yield new insights.

Between 1971 and 1977, the Ohio Historical Society conducted excavations in the fields adjacent to Seip Mound, an immense burial mound of the Hopewell culture (c. 100 B.C. A.D. 400) located about 14 miles southwest of Chillicothe.

Ray Baby, then curator of archaeology for OHS, uncovered the remains of seven roughly rectangular wooden structures located between Seip Mound and the wall of a circularembankment that surrounded the mound. Baby and his team found no cooking hearths or food waste, so they concluded that the structures were not ordinary dwellings. 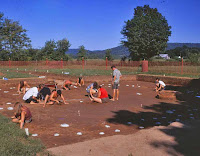 Instead, they suggested the timber-framed buildings were specialized workshops where Hopewell artisans crafted the beautiful objects made from exotic materials, such as mica and shell, which previous archaeologists had found in the Seip Mound.

N’omi Greber, archaeologist with the Cleveland Museum of Natural History, decided that it was time to reconsider the evidence for this view, which had become widely accepted. In the Spring 2009 issue of the Midcontinental Journal of Archaeology, she and seven colleagues review the evidence in ten separate articles.

Anne Lee, archaeologist with Hardlines Design Company of Columbus, examined the shells found in and around the houses and found no evidence that beads were being manufactured there.

Richard Yerkes, Ohio State University archaeologist, studied microscopic traces of wear on the stone tools and found no evidence of “special activities in or near these structures.” Although four tools had been used to “engrave or cut mica or some other stone,” this was only 11% of the tools exhibiting use-wear, and such percentages are not at all unusual for tools found at ordinary Hopewell habitation sites.

Jarrod Burks, archaeologist with Ohio Valley Archaeology, Inc., and Greber looked at the evidence from the pits associated with the houses. They found no evidence that the pits were used in craft production.

The other studies all confirm the lack of substantive evidence for specialized craft production in the vicinity of these structures.

But if they weren’t ordinary dwellings or craft houses, what were they?

In a concluding essay, Greber states they were “special places” used for periodic rituals. This may not be as simple or satisfying an interpretation as “craft houses,” but it represents all that we can reliably infer from the data.

Moreover, it is now clear that all the artifacts supposedly found in the houses actually are from earth deposited on the remains of the houses. Once the ritual use of the structures had concluded, the Hopewell removed the wooden posts and buried the floors under shallow mounds of earth.

This earth came from somewhere nearby and included, probably accidentally, the stone tools and broken pottery that had been used at these other places. So the artifacts found on the house-floors came from activity areas that may have been completely unrelated to what went on in the houses. And even if the artifacts were used in or very near the houses, they don’t support the craft house interpretation anyway.

In a separate article, Greber notes that “the penchant of Scioto Hopewell peoples to clean up and frequently move about the evidence of their ritual/ceremonial activities is a frustrating but unavoidable fact.”

Baby and his team erred in the interpretation of the Seip houses, but because they saved all the artifacts from the dig and kept careful records of the excavation, researchers 30 years later have been able to put their interpretation to the test.

This is precisely why archaeologists dig with such meticulous care, why the location of each artifact is plotted on a map, and why the artifacts, maps, photographs, and notes are stored for future study.

This is how archaeologists “repeat the experiment.”

OHS set new, short posts into the ancient postholes that marked the outlines of three of the Hopewell houses. So when you visit Seip Mound State Memorial today, you can see the foundations of these “special places.” 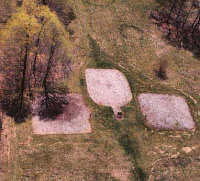