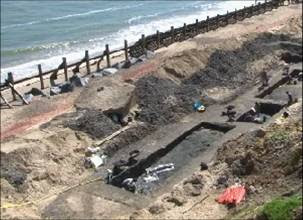 A spectacular haul of ancient flint tools has been recovered from a beach in Norfolk, pushing back the date of the first known human occupation of Britain by up to 250,000 years.

From the Guardian UK:
While digging along the north-east coast of East Anglia near the village of Happisburgh, archaeologists discovered 78 pieces of razor-sharp flint shaped into primitive cutting and piercing tools. The stone tools were unearthed from sediments that are thought to have been laid down either 840,000 or 950,000 years ago, making them the oldest human artefacts ever found in Britain. The flints were probably left by hunter-gatherers of the human species Homo antecessor who eked out a living on the flood plains and marshes that bordered an ancient course of the river Thames that has long since dried up. The flints were then washed downriver and came to rest at the Happisburgh site.The early Britons would have lived alongside hyenas, primitive horses, red deer and southern mammoths in a climate similar to that of southern Britain today, though winters were typically a few degrees colder. “These tools from Happisburgh are absolutely mint-fresh. They are exceptionally sharp, which suggests they have not moved far from where they were dropped,” said Chris Stringer, head of human origins at the Natural History Museum in London. The population of Britain at the time most likely numbered in the hundreds or a few thousand at most. “These people probably used the rivers as routes into the landscape. A lot of Britain might have been heavily forested at the time, which would have posed a major problem for humans without strong axes to chop trees down,” Stringer added. “They lived out in the open, but we don’t know if they had basic clothing, were building primitive shelters, or even had the use of fire.”

The discovery, reported in the journal Nature, overturns the long-held belief that early humans steered clear of chilly Britain and the rest of northern Europe in favour of the more hospitable climate of the Mediterranean. The only human species known to be living in Europe at the time is Homo antecessor, or “pioneer man”, whose remains were discovered in the Atapuerca hills of Spain in 2008 and have been dated to between 1.1m and 1.2m years old. The early settlers would have walked into Britain across an ancient land bridge that once divided the North Sea from the Atlantic and connected the country to what is now mainland Europe. The first humans probably arrived during a warm interglacial period, but may have retreated as temperatures plummeted in subsequent ice ages.Until now, the earliest evidence of humans in Britain came from Pakefield, near Lowestoft in Suffolk, where a set of stone tools dated to 700,000 years ago were uncovered in 2005. More sophisticated stone, antler and bone tools were found in the 1990s in Boxgrove, Sussex, which are believed to be half a million years old. “The flint tools from Happisburgh are relatively crude compared with those from Boxgrove, but they are still effective,” said Stringer. Early stone tools were fashioned by using a pebble to knock large flakes off a chunk of flint. Later humans used wood and antler hammers to remove much smaller flakes and so make more refined cutting and sawing edges. The great migration from Africa saw early humans reach Europe around 1.8m years ago. Within 500,000 years, humans had become established in the Mediterranean region. Remains have been found at several archaeological sites in Spain, southern France and Italy.

In an accompanying article in Nature, Andrew Roberts and Rainer GrÃ¼n at the Australian National University in Canberra, write: “Until the Happisburgh site was found and described, it was thought that these early humans were reluctant to live in the less hospitable climate of northern Europe, which frequently fell into the grip of severe ice ages.” Researchers led by the Natural History Museum and British Museum in London began excavating sites near Happisburgh in 2001 as part of the Ancient Human Occupation of Britain project and soon discovered tools from the stone age beneath ice-age deposits. So far, though, they have found no remains of the ancient people who made them. “This would be the ‘holy grail’ of our work,” said Stringer. “The humans who made the Happisburgh tools may well have been related to the people of similar antiquity from Atapuerca in Spain, assigned to the species Homo antecessor, or ‘pioneer man’.”

The latest haul of stone tools was buried in sediments that record a period of history when the polarity of the Earth’s magnetic field was reversed. At the time, a compass needle would have pointed south instead of north. The last time this happened was 780,000 years ago, so the tools are at least that old. Analysis of ancient vegetation and pollen in the sediments has revealed that the climate was warm but cooling towards an ice age, which points to two possible times in history, around 840,000 years ago, or 950,000 years ago. Both dates are consistent with the fossilized remains of animals recovered from the same site.

“Britain was getting cooler and going into an ice age, but these early humans were hanging in there. They may have been the remnants of an ancient population that either died out or migrated back across the land bridge to a warmer climate,” said Stringer.