ELSA RICAUD ON THE ANCIENT EARTHWORKS OF OHIO AND ST LOUIS

ELSA RICAUD ON THE ANCIENT EARTHWORKS OF OHIO AND ST LOUIS

During the summer of 2012, Elsa Ricaud initiated a study of the mounds and earthworks of eastern North America as part of a research project supported by a Richard Morris Hunt Fellowship sponsored by the American Architectural Foundation, the French Heritage Society and the group Lafarge.

As part of her project, she created a blog and has graciously allowed us to publish the following entry, which includes her observations on the on the Fort Ancient Earthworks and the Newark Earthworks.

WEEK 6 : The Earthworks of Ohio and St-Louis (MO)

I left the Finger Lakes for Ohio, where several pre-Columbian cultures are referred to as the “mound builders,” because of the very large earthen mounds they built. The “Adena Culture” lived between about 1000 BC and AD 100, the Hopewell Culture between 100 BC and AD 400 and the “Mississippian Culture” between AD 800 and 1500.

Several of the Ohio Hopewell earthworks are on the World Heritage Tentative List. These geometric structures occupy a very large area of land. They were made for ceremonial and burial purposes attracting thousands of Natives Americans and were linked with astronomical observations and beliefs. One of the best sites to experience the extraordinary scale is the Newark Earthworks (Hopewell culture) where I had the pleasure to visit with Richard Shiels (Ohio State University) and Bradley Lepper (archaeologist – Ohio Historical Society).

I also visited the Fort Ancient site (also Hopewell Culture) with its huge earthen enclosure network. Here I walked the site with John Hancock (architect – University of Cincinnati). (Although the Fort Ancient Culture is named for the site, it is actually a Mississippian era culture.)

These pre-Columbian populations settled on fertile lands along tributaries of the Ohio River and also used the clayey soil to raise up their sacred shrines. Their burial mounds are usually conical and made of several layers of soil, clay and sand, alternating with  mortal remains, like the Mound City site (Hopewell Culture). Some of them also utilized sod. Some others are reinforced with stones, like the Serpent Mound (Fort Ancient Culture), a very long mound depicting a sacred snake, that I visited with Dave Kuehner (formerly the site manager).

Excavations at Fort Ancient revealed that the natives mastered several techniques to allow the waterproof quality of the ditches that might have held water, thanks to clay coatings. They also knew how to improve the coherence of the mounds, mixing together different kinds of soils and dried clay and also may have practiced some collective ceremonies that consisted of covering the ground of sacred spaces with clays of different colors, an action that we can consider as a metaphor of some present Indian Creation myths describing that humanity was made from the clay of a sacred hill. The Creek and the Shawnee tribes, considered as possible descendants of these pre-Columbian cultures, still believe in this myth and I saw, during my trip to New Mexico, that this social and religious aspect of collective clay coating, is also well established among the Puebloan tribes. 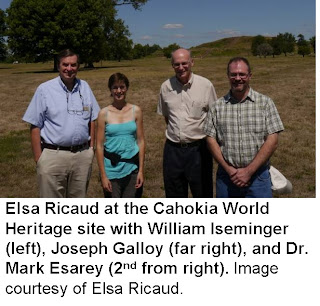 The dwellings around these ceremonial places were first dispersed (Hopewell Culture) and began to form villages under the Mississipian Culture. Excavations revealed that building techniques were quite similar from one culture to another and were based on a wooden frame with wattle-and-daub walls. I visited two sites showing this kind of house. The East St-Louis town, where I met Joe Galloy (archaeologist – Illinois State archaeological survey), is now under excavation because of highway contruction and is now considered as one of the main examples of Mississipian Culture towns. The second one, SunWatch Village, that I visited with Andrew Sawyer (archaeologist – site manager), is a reconstruction of a village of about the same period. Both of them show the archaeologists’ interesting deductions about building techniques, from very scarce clues like holes left by posts into the ground, or grassprints left into dried clay.

The recognition of these earthen sites as part of the national heritage is now accepted, but their conservation is still an important concern. The great Monks Mound platform at Cahokia (Mississipian Culture), that I visited with Joe Galloy (Research Coordinator), Mark Esarey (Site Manager) and William Iseminger (Assistant Site Manager), is considered as the largest earthen structure in the USA. Recurrent slumpings of its eastern side necessitated some technical enquiries to identify the best restoration process. Such excavations are often prone to tensions between scientists and Native Americans who still engage in prayer at these sites. But these relations are now more and more improved thanks to the use of nondestructive techniques such as ground penetrating radar or LiDAR.

Earthen mounds also have to be protected against erosion and invasive vegetation, so some are regularly burned and covered by a special grass developped by agronomists.

These earthen mounds can also be a source of inspiration for contemporary artists. The landscape design of the Cincinnati campus, that I visited with John Hancock  (architect – University of Cincinnati), was realized by the architect George Hargreaves, after he visited the Ohio earthen mounds. Thanks to a landscape vocabulary based on months, organic shaped embankments and holes, he managed to homogenize the heterogeneous architecture of the campus, and the result is relevant.