H. Holmes Ellis, Research Assistant at the Ohio Historical Society’s Lithic Laboratory for the Eastern United States, in his annual report of the Lab’s activities for “the year April, 1941 — April, 1942, described one of their most important achievements for the year: 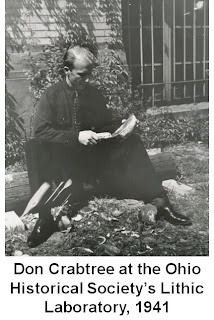 “The Lithic Laboratory discovered a remarkably able flint chipper, Don E. Crabtree of Twin Falls, Idaho, and acquired his services for two months in the early summer of 1941. Mr. Crabtree, during his stay in Columbus, contributed largely to the rediscovering of two elusive ‘lost arts,’ Folsom fluting and the manufacture of flake knives. Achieving either one of these difficult techniques would have been worth his trip east; we had not hoped for both successes.” 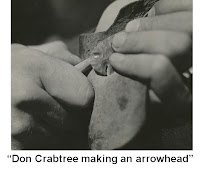 Don Crabtree would go on to become the “Dean of American Flintknapping.” His 1972 publication An Introduction to Flintworking, is still a useful reference for anyone who wants to understand what is involved in making stone tools. Crabtree taught many archaeologists, including my mentor, the late Rob Bonnichsen, the art of flintknapping. Rob tried to pass some of that knowledge along to me in a lithic technology workshop, but I am afraid I never got much beyond the Acheulean stage of craftsmanship. Nevertheless, the insights I did manage to glean from knocking rocks together have helped me immeasurably in my understanding of ancient stone tools. Don Crabtree and the OHS Lithic Laboratory were pioneers in bringing those valuable insights to the attention of the discipline of archaeology. 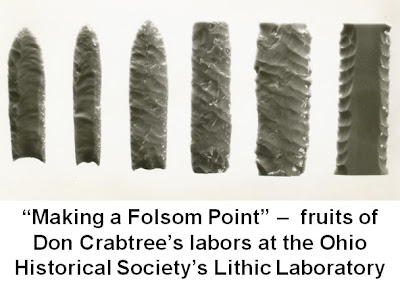