Did I See What I think I Saw?

Did I See What I think I Saw? 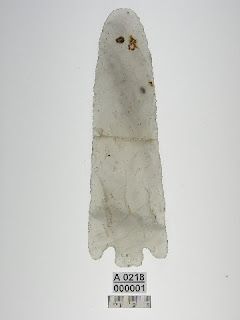 While working in the collections a number of years back, I came across the item pictured in the top inset, A 218/1. Object A 218/1 is a long, narrow, basally notched biface flaked from vein quartz or possibly Arkansas novaculite. It measures 8.25 x 2.30 inches in length and width and is a mere 5/16 of an inch thick. Unfortunately for this magnificent speciman, it was fractured transversely across the middle of the blade at some time in its long history.

A 218/1 is also pictured on page #11 of the small book FORT ANCIENT by Richard G. Morgan, a brief over view of both the Fort Ancient site and the nearby Anderson Village, published in 1946 by the Ohio State Archaeological and Historical Society (now the Ohio Historical Society). In FORT ANCIENT Morgan provides a brief history of the site and of archaeological investigations undertaken there through Morgan’s 1939 field season. According to the pamphlet, A 218/1 was recovered from an area outside the north fort east of the great twin mounds described by Morgan as a Hopewell village. Also recovered there during the 1939 field season were objects of flint, mica, copper, ceramic, hard stone and slate. While the exact boundaries were not established, Morgan describes the village area as being extensive.

Upon close inspection of A218/1, it would appear that the flaking is somewhat less than spectacular, without the fine retouch seen on other large Hopewell points. However, it is the case that vein quartz is not the easiest material to knap and considering the raw material he or she had to work with and the exceptional thinness of the finished product, the maker actually made an masterful effort in knapping the point. As a type it probably falls into the category of a variant of the Ross Barbed variety, a rare type usually reserved to Hopewell ceremonial contexts. This aside and except for its smaller size, it also bears a strong resemblance to both the Seip-Pricer Spear and the so-called Painesville spear, both attributed to the Hopewell culture. However, both are much larger items and both are flaked from what appears to be Arkansas novaculite or a similar semi-translucent white stone.

During the depression years of the 1930s, the CCC or Civilian Conservation Corps carried out a number of site improvement projects at Fort Ancient including erosion control, the establishment of hiking paths and scenic overlooks and the addition of a large picnic shelter house in the south fort. The shelter house is somewhat rustic in appearance, constructed of rough, native stone with large, hewn timber roof joists and a flagstone floor. In keeping with Fort Ancients Native American heritage, an oversized projectile point three feet or so in length was chipped from a large limestone slab and put into the floor near the center of the structure, likely to act as a focal point of sorts. While giving a presentation there a couple of years back I happened to be standing near the center of the shelter house. When I looked down (see images below) it caused me to do somewhat of a double take and I thought to myself did I see what I think I saw?

There in the floor was an uncanny likeness of A 218/1, the large quartz point found just outside the north fort at Ft Ancient, complete with the fracture across the blade that appears to have occurred long after the facsimile point was installed. Whether A218/1 served as a model for the floor ornament or that design was chosen at random is not known although it should be noted that the shelter house was constructed several years before Morgans 1939 field work. All I can say is take a look at it for yourself and you be the judge. Sometimes facts can be stranger than truth. 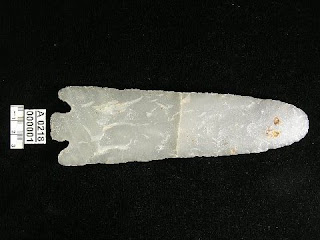 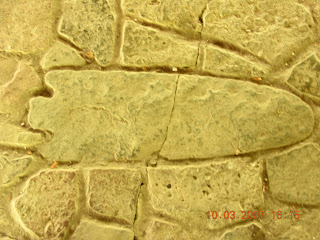