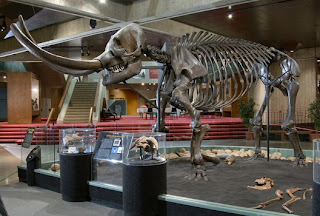 (COLUMBUS, OHIO)-How do you move a 10,000-plus-year-old mastodon skeleton?

During the first week of January 2011, the Conway Mastodon, an iconic exhibit at the Ohio Historical Center in Columbus, will be disassembled and turned to a new position, then reassembled. The move is in preparation for renovation of the centers entrance scheduled to begin in February.

Thursday Jan. 6, through Saturday, Jan. 8, from 10 a.m. to 5 p.m., visitors will have the rare opportunity to see all the action as a team from the Ohio Historical Society and Ohio State University meticulously moves the 10-foot-tall mastodon skeleton and other ice-age animal bones on display. The last time the mastodon was moved was in 1993 for the opening of the centers natural history exhibit The Nature of Ohio.

In 1887, Newton S. Conway unearthed what became the largest and most complete mastodon skeleton discovered up to that time from a swamp on his farm on the Clark-Champaign County line. The Conway Mastodon was an immediate sensation and made the rounds of several county fairs. The skeleton was eventually donated to Ohio State University and was on display in Orton Hall for 25 years. In 1970, when the Ohio Historical Center opened, the university loaned the Conway Mastodon to the Ohio Historical Society. It been greeting visitors to the societys natural history exhibit area ever since.

About 70 percent of the skeleton is complete. The mastodons enormous tusks, weighing more than a hundred pounds each, were deemed too heavy and were replaced with lightweight, fiberglass replicas. The real tusks now lie at its feet.

Mastodons were distant relatives of modern elephants and lived during Ohios last ice age about 10,000 to 14,000 years ago. They were covered in heavy, shaggy, brown fur and lived on a vegetarian diet. Because mastodon bones have been found all across the state, it is thought that mastodons were once relatively common and that their meat provided a good foodstuff for prehistoric hunters.

Learn about this impressive creature who lived in the Pleistocene Epoch and what Ohio was like during the ice age. Youll find out answers to questions like why did mastodons go extinct? Or whats the difference between a mastodon and a woolly mammoth?

Visitors will be able to touch mastodon bones used in our educational programs. Other Pleistocene-era bones will be on display, such as stag moose, the Farrington Mastodon and giant beaver skulls. In addition, they explore The Nature of Ohio exhibit can with its five themes of Ohios natural history: plants, animals, geology, geography and climate.

No bones about it, visitors to the museum will see what it takes to move a skeleton this large and this old, Glotzhober said. Plus theyll learn a lot about mastodons and other animals that lived in Ohio during the ice age.

The mastodon exhibit is so popular it has its own Facebook page. Conway the Mastodon will be posting his musings as well as information about mastodons and the ice age in general plus other happenings at the museum.

Those who are unable to visit the Ohio Historical Center to watch the disassembly and reassembly of the mastodon skeleton in person can follow the move online in real-time at www.ohiohistory.org/conway.