By now you’ve probably heard that the Carolina Wolf Spider (Hogna carolinensis), not found in Ohio since 1963, was re-discovered in Adams County a few weeks ago.

I first heard about it from a coworker, who said the photo accompanying the article (since deleted) depicted something tarantula-like. His perception was that of a frighteningly large and possibly angry spider. His vivid description led me to assume that the wrong picture had been used for the articlethere are no spiders even remotely approaching tarantula size in Ohio!

Once I had a chance to read the article, I could see that this certainly was not a picture of a tarantula, and if anything it seems more befuddled than antagonistic. Whatever the species, it is indeed quite an arresting arthropod. What gorgeous flame orange chelicerae!One might more readily believe this lovely animal to be some manner of tropical denizen rather than a native Ohioan, but my initial assumption turned out to be quite false. The photo is not only the correct species, but also THE individual discovered in Adams County! The cord-like device plumbing the depths of his burrow is a borescope, a flexible tube with a light and a camera on the end. Without this invaluable tool the spider may not have been rediscovered at all! The Carolina Wolf Spiders leg span may approach 3 to 4 inches, making it the largest wolf spider species in North America.
Wolf spiders (Lycosidae) are a family of ground-dwelling arachnids that actively stalk and pursue their insect prey, hence their name. Like most spiders they have eight eyes, but four are especially well-developed.  They are capable of great bursts of speed, but climb poorly. As fall approaches wolf spiders can sometimes be found taking shelter in homes and garages, where they hunt down the insect pests in your house. So if you see a fairly large spider scurrying across your floor, don’t worry! Wolf spiders are reluctant to bite and their venom is not dangerous to humans, so with gentle handling they can be safely relocated outside, if desired.

It’s unlikely that youll find a Carolina Wolf Spider in your house anytime soon, however. The species was re-discovered in remnant prairie habitat within the Edge of Appalachia Preserve system in Southwest Ohio. According to the US Forest Service, less than 0.01% of Ohio’s original prairie habitat remains. Prairies support an immense number of rare plant and animal species, from orchids to butterflies to bobolinks to bison, so protecting prairie habitat has an umbrella effect. Prairies are vastly underappreciated, yet they provide incalculable ecological services–chief among them, the prevention of soil erosion and evaporative water loss. Unfortunately, almost all of North America’s remnant prairie has been converted to agriculture, and untold volumes of topsoil have been lost as a result. Indeed, the Nature Conservancy states that prairies and grasslands are the world’s most imperiled ecosystem.

While greatly reduced in acreage from its former splendor, it is encouraging that Ohio’s prairies are still hale enough to support the return of this important predator.

In closing, I’ll share one more thought. While researching this blog post, I discovered that the above photo above had been cropped. Here is the original: 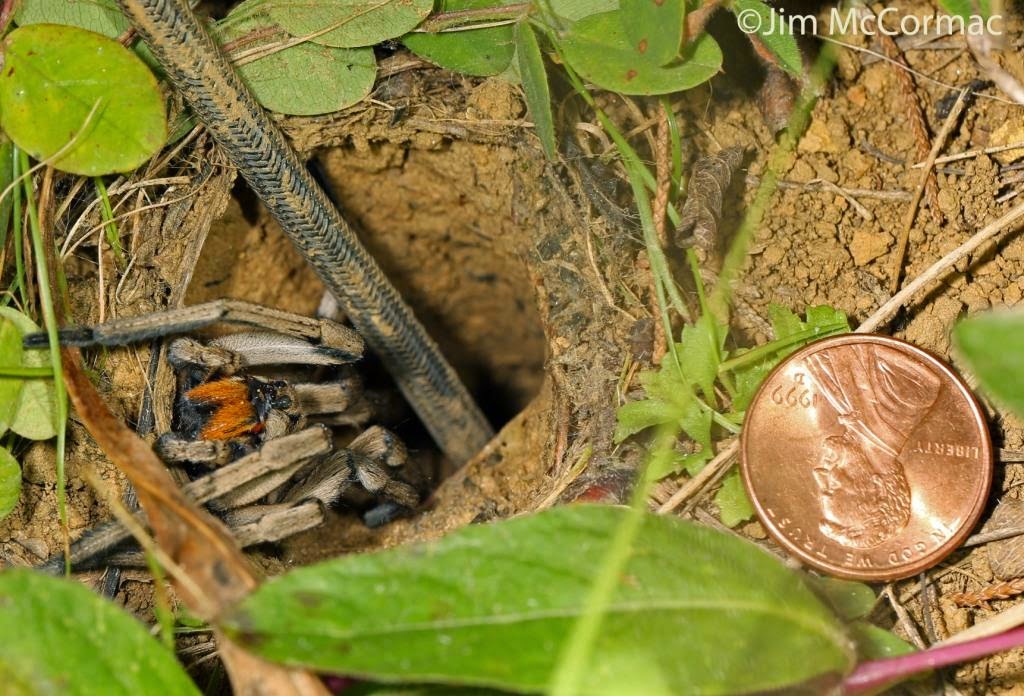 I wonder if my co-worker would have perceived the spider in quite the same way if he’d seen this photo instead.

Now that you’ve seen it, did your perception of the spider change?  Let us know in the comments!

Jim McCormac of ODNR is one of the three naturalists who re-discovered this impressive arachnid. I highly recommend that you read Mr. McCormac’s full account of the encounter here.