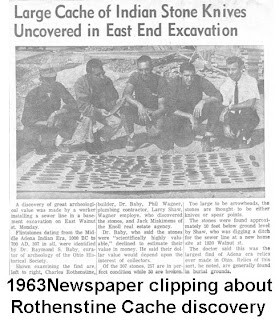 Attached is an old newspaper clipping recently found behind a row of filing cabinets in our collections facility. It highlights the 1963 discovery in Coshocton, Ohio of the Rothenstine Cache, a large cache of flint bifaces or cache blades. The word biface indicates a piece of flint made into a tool or other refined form by the removal of flakes from both the front and back sides or faces. The article noted that there were 307 items recovered although this number was later expanded to 342. They were recovered from a depth of about 10 feet during a house foundation excavation by local builder Charles Rothenstine. 334 of the objects were arranged in a tightly packed row, side by side and on edge. These were covered with eight additional flat lying bifaces. They ranged in size from 2.5 to 8.5 inches in length and were generally teardrop shaped to semi-ovoid in outline. They appeared to be preforms rather than finished projectile points as there was no obvious edge wear or other evidence that any were ever used as implements. The blades were made from nearly pure black Upper Mercer Flint, commonly referred to as Coshocton or Nellie Flint. The nearest source of this type of flint and most likely the source of the material used to create the Rothenstine Cache are the flint deposits in the Walhonding River Valley in the Nellie/Warsaw area, a few miles northwest of Coshocton. Geologically speaking Upper Mercer Flint is of Pennsylvanian Age and formed during the time when the great coal swamps were at their peak, some 286 to 320 million years ago. These deposits were utilized for thousands of years by Ohios prehistoric peoples and items made from Upper Mercer Flint are commonly found well beyond the present limits of the state of Ohio. 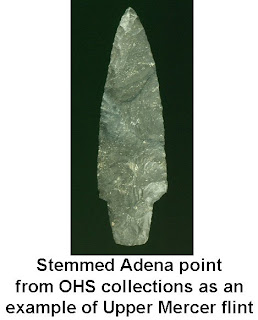 Typically Upper Mercer flint is a high quality material that occurs in color from jet black to grays and tans that are often mottled or streaked with black. Some of the black to dark gray varieties exhibit small veins and vugs (very small cavities) of white quartz micro-crystals that give the material a certain bluish caste. The Rothenstine Cache was identified by then Curator of Archaeology at the Ohio Historical Society, Raymond S. Baby as dating to the Adena period, approximately 2,000 years before present. The Adena are also noted as Ohios earliest mound building culture. The Rothenstine cache is currently on display as part of an excellent prehistoric stone tool exhibit at the Johnson-Humrickhouse Museum in Roscoe Village across the river from Coshocton, Ohio. The Johnson-Humrickhouse Museum features an array of high quality exhibits with themes as diverse as historic and prehistoric Native American materials, the controversial Newark Holy Stones, 18th and 19th Century household furnishings and firearms and an exceptional collection of Asian decorative arts and weaponry.

Other Caches In 1982 a deposit of 356 teardrop shaped bifaces or preforms similar to the Rothenstine Cache only made from Flint Ridge Flint was discovered by a farmer named Lukens in Portage County, Ohio. Flint Ridge Flint comes from deposits located in the hills east of Newark that extend nearly to Zanesville. Flint Ridge Flint is also of Pennsylvanian age but geologically slightly younger than the Upper Mercer deposits and are thought to have formed in shallow marine basins rather than coal swamps. It is notable for its high quality and wide range of colors. It is also Ohios official gemstone. Stylistically speaking it would appear that the Lukens cache also dates to the Adena Period. Unfortunately they were brought to the surface by a plow blade and it isnt known exactly how they were arranged when originally deposited although it would appear that they had been contained in a wooden vessel. Many were partially stained with red ochre, a natural iron oxide that is often, but not always, associated with some sort of mortuary ceremonialism. And, as with the Rothenstine blades it doesnt appear that any of the Lukens objects had been used as implements. 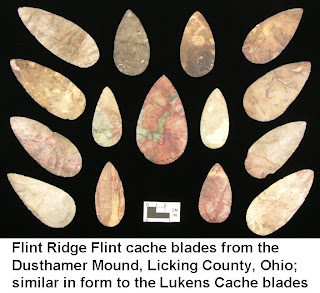 They were created for some defined purpose and eventually deposited in the ground. Actually that particular piece of real estate where the Lukens blades were recovered was likely a shallow lake or swamp when the cache was deposited, making its occurrence there even more intriguing. What does it all mean? Isolated caches of blades and finished points are encountered from time to time as the result of farming and other forms of land development. They are also common features of Adena and Hopewell burial mounds, but neither the Rothenstine nor Lukens deposits were from mound contexts. The presence of red ochre on the Lukens items would seem to indicate that they might be ceremonial offerings although this particular trait was absent on the Rothenstine items. It could be simply that they were created and secreted away for future use and never retrieved. I suppose thats something known only to the ancients. 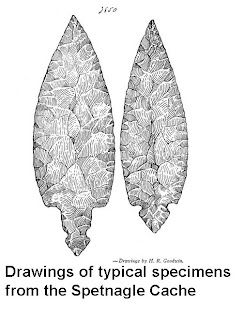 In Ohio the caching of preforms and finished projectile points is certainly not limited to just the Adena Period. In 1922 A.C. Spetnagle facilitated the recovery of a cache of more than 200 Turkeytail points ranging from 2½ to 10½ inches in length was recovered from a cellar excavation on the north side of Chillicothe, Ohio. All were made from Indiana Hornstone, a drab, gray flint also referred to as Harrison County flint. Hornstone is found in limestone and dolomite deposits in southwestern Indiana and western Kentucky. It typically occurs in spherical nodules from a few inches to more than a foot in diameter thought to have formed in a concretionary manner over an extended period of time. When the nodules are split the accreted layers can be quite distinctive not unlike old fashioned jawbreaker candy and often have a pronounced bulls-eye aspect to them with a slightly crystalline center or core. Turkeytail Points are typically thin, well flaked, bi-pointed or laurel leaf shaped bifaces usually with two small side notches close to the tip at one end and at the same time it isnt uncommon to find some that are quasi-stemmed. As a type they date to the end of the Late Archaic period where they are thought to slightly predate the Adena Culture. They are invariably made from Hornstone and often produced in a manner to highlight the flints bulls-eye effect with the nodules crystalline center located at the center of the finished point. 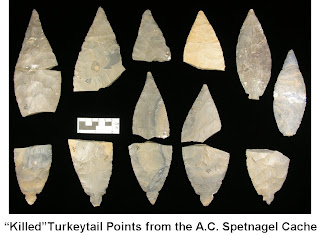 Turkeytail caches have been found through western and northwestern Ohio into Indiana, Michigan, Illinois and Wisconsin. While isolated items have been discovered they are usually found in large caches that can only be termed as ceremonial. As is common with Turkeytail Point caches in general every biface in the Spetnagle Cache had been ceremonially killed or purposely broken at the time of deposition. Even when pieced back together they show no use wear or other evidence of having been utilized as tools. Its as if Turkeytail Points were some sort of currency made to be put into circulation only to be immediately removed. It’s interesting to note that all point fragments from the Spetnagel Cache could be refit to piece together a complete point. That is, some are missing. Perhaps some were taken away at the time the “killing” ceremony as souvenirs or holy relics of the occasion. 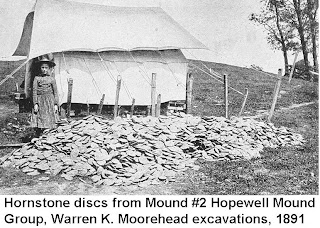 Between the 1840s and the 1920s and from the various excavations of Squier and Davis, Warren Moorehead and Henry Shetrone, upwards of 11,000 large, crudely flaked Hornstone bifaces or discs were recovered from a single deposit in Mound #2 at the Hopewell Earthworks in Ross County, Ohio. Considering that a single item could average a pound or more, the entire deposit might weigh in at greater than 6 tons! Whatever the motivation was to expend the energy needed to travel to the quarry area, extract the raw material and reduce it to disc form and transport it all several hundred miles back to the Hopewell site just to create a relatively small feature in a 110 acre earthwork complex can only be imagined. 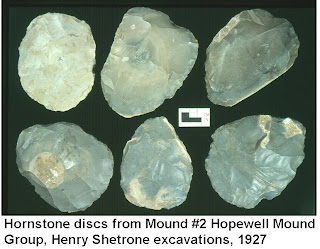