BURROWS CAVE AND OTHER ARCHAEOLOGICAL FANTASIES

BURROWS CAVE AND OTHER ARCHAEOLOGICAL FANTASIES

In a recent paper in Public Archaeology, Joseph Wilson exposes the Burrows Cave site in Illinois as a ludicrous farce and says that archaeologists have been remiss in allowing such silliness to go unanswered. I discuss Wilsons arguments in my March column in the Columbus Dispatch.

If you’re not an avid reader of the Ancient American, a magazine devoted to proving that Columbus was only the last in a long parade of African, Asian and European discoverers of America, you may not be aware of the wonders supposedly entombed within the depths of Burrows Cave — wonders that make what Howard Carter found in Tutankhamens tomb look paltry by comparison. 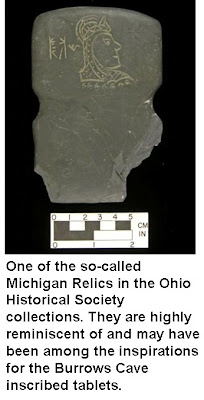 The extravagant claims of gold statues, gold sarcophagi, gold coins, bronze weapons, and parchment scrolls, however, have never been verified. Instead, of sharing any of these remarkable objects with the world, the discoverer instead has brought forth thousands of inscribed stone tablets bearing images of what appear to be various Old World peoples, including Phoenicians, Hebrews, and Romans. Wilson writes that thousands of these tablets have been sold to hopeful collectors.

Wilson concludes that Burrows Cave has been a crude, but highly successful con game. Its success is due principally to the gullibility of those people anxious to believe in what the tablets appear to reveal about America’s ancient past. Wilson, however, makes the compelling argument that a large part of why the hoax has succeeded for so long is the general failure of archaeologists to recognize the seriousness of the threat posed by this sort of activity. He claims that a thorough debunking of these claims in a mainstream journal twenty years ago might have nipped this problem in the bud.

He goes on to offer Burrows Cave as a lesson for aspiring archaeologists; proof of what happens when professionals turn their noses up at opportunities for engagement with community interests, no matter how obscure they may seem.

I agree with Wilson and, over the course of my career, I have made efforts to call attention to unsupported claims about the past, including writing columns on various examples for the Dispatch.

I am sure that, because I am primarily a museum archaeologist rather than a full-time university professor, I am more sensitive to issues relating to public education than are my more academically oriented colleagues, but Wilson makes a strong case that all professional archaeologists should take more responsibility for setting the record straight when such controversies appear in public discourse.
Here are links to several examples of my responses to archaeological mis- (or dis-) information: 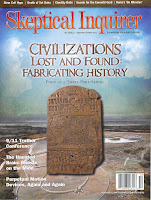