Better Than a Pointed Stick in the Eye – Not Really

Better Than a Pointed Stick in the Eye – Not Really

Projectile points are, or so it can be claimed, found in all types of odd situations. In the August Wehrle collection at the Ohio Historical Society there are a number of deer vertebrae Mr. Wehrle had collected over the years that were all pierced by flint points or so it would appear. Wehrle was a Newark, Ohio industrialist that amassed a fortune manufacturing stoves. He was also an ardent artifact collector and filled out his collection through a number of sources, some perhaps more reliable than others. Although the pierced vertebrae are very impressive as a group it might be better to take them with a grain of salt. Should there be an individual or a group of individuals that would like to examine these Wehrle Collection objects using X-ray or other imaging techniques OHS would be glad to accommodate their research. 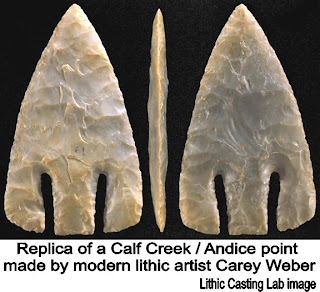 About 1995 what looked like a fluted Clovis point was found embedded in a large tree branch from a bog in northern Ohio. It was even more interesting in that sometime in the ancient past the branch had been chewed on by a beaver or muskrat or some other semi aquatic mammal. Only the basal portion of the point was visible so an exact identification of the point wasnt possible. X-ray images of the wood fragment in question revealed that the projectile point was more typical of an Early Archaic Dalton point than an earlier Clovis style point. The X-ray further revealed that by looking at the way the wood fibers were damaged and displaced it could have only become lodged in the branch when the wood was green or nearly green, that is about 8,000 to 10,000 years ago. The circumstances of how it became lodged in the beaver chew will probably never be known. Perhaps an ancient hunter missed his mark on the very animal that had been gnawing on the tree trunk. Whos to say? 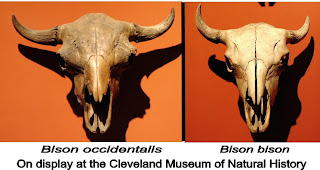 A couple of years back an individual walking along a sand bar in the Arkansas River near Tulsa, Oklahoma came across a large fragment of a buffalo skull. It so happened that this skull was different than others commonly found in the region. Instead of curving sharply upward as is common to the modern North American Bison these horn cores extended laterally somewhat before curving upward indicating that it was from the prehistoric species Bison occidentalis, a subspecies of the ice age Bison antiquus. Both of these species are ancestral to todays smaller and more familiar North Arerican Bison or Bison bison that still roam portions of the Great Plains today. In turn these species are themselves all descended from Bison latifrons, an eight foot tall Pleistocene giant whose horns could have easily spanned seven or more feet. 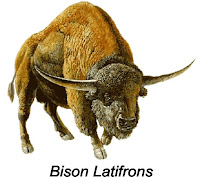 A closer inspection of the ulsa skull fragment revealed the remnant of a flint projectile point embedded in what would have been the forehead of the animal, just above the right eye. Further examination by X-ray and other imaging processes showed it to be a fragment of whats known as a Calf Creek point, a point type common to Texas, Oklahoma and northeast into Arkansas and Missouri, possibly dating to as early as 5,000 to 6,000 years before present. Calf Creek points (sometimes referred to as Andice points especially in Texas) are thin, broad points with a long stem and deep basal notches. What is most unusual is that for a long time these types of points were typically thought to be used as hafted knives and not spear points per se. At first glance they dont appear nearly robust enough to tip a spear or atlatl dart. I guess it just goes to show you that the experts dont always know what they are talking about.

Attached is a link to a short article about the find that was interesting enough to get the attention of the PBS show History Detectives A second link is provided to a transcript of that particular episode.