Battle of Shiloh in Ohio Papers

The hardest battle ever fought on this continent: New Ohio Papers Added to Chronicling America Report on the Battle of Shiloh

One of the greatest and bloodiest battles of modern days has just closed reported the Fremont Journal on April 11, 1862. The Battle of Shiloh, also known as the Battle of Pittsburg Landing, had just been waged in southwestern Tennessee. In the early hours of April 6, 1862, exactly 150 years ago today, Confederate troops launched a surprise attack on a Union camp under the command of General Ulysses S. Grant.

Map of the battle site at Shiloh/Pittsburg Landing published in the April 10, 1862 issue of the New York Daily Tribune (p. 8, col. 2).
As the fighting continued into the next day, over 3,400 men (about 1,700 on each side) were killed and over 16,000 (about 8,000 on each side) were injured, including Ohioan and Union General William T. Sherman who was wounded in the hand by a cannon ball and Gen. Grant who suffered a small ankle injury. The death toll for Bloody Shiloh was the highest of any Civil War battle up to that point. The Union ultimately claimed a victory over the Confederacy, forcing their retreat to Corinth while the Union army gained control of the Mississippi basin. 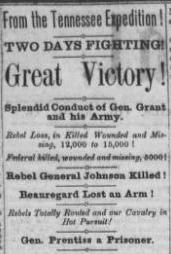 Excerpt from the Fremont Journal, April 11, 1862, p. 2, col. 2.
Newspapers like the Fremont Journal combined reports from several sources to provide their readers with the most up-to-date information about this brutal battle. In its April 18, 1862 issue, the Fremont Journal printed a list of the dead and wounded from the 72nd Ohio Volunteer Infantry, which was comprised mostly of men from Sandusky County. The soldiers families, friends and neighbors were undoubtedly anxious to know how their boys had fared at Shiloh. The next week, on April 24, 1862, the Weekly Perrysburg Journal published a list of Ohio regiments that had fought in the battle.

Excerpt from the Weekly Perrysburg Journal, April 24, 1862, p. 3, col. 2.
Want to learn more about the Battle of Shiloh from Ohio newspapers? Check out the Ohio Historical Societys latest contributions to the National Digital Newspaper Program and Chronicling America! Issues from the following Ohio papers are now online and keyword searchable on the Chronicling America:

These papers join nearly five million newspaper pages and more than 700 newspapers from all over the nation, including 28 others from Ohio, to chronicle United States history from 1836 to 1922. To find information about this battle, use the search terms (not including the brackets) <Shiloh>, <Pittsburg>, and <battle> in combination. Dont forget to use the advanced search to limit your search results to pages published between April and May 1862. This will help you retrieve the most relevant information. Limit your search further by using the Select State(s) or Select Newspaper(s) options to only view results from specific states or papers.

Over the coming months, more of Ohios Civil War newspapers will become digitized and freely-available on Chronicling America through the National Digital Newspaper Program in Ohio, giving you access to even more stories that were written about the war as it was happening. The National Digital Newspaper Program is a partnership between the National Endowment for the Humanities and the Library of Congress and state projects to provide enhanced access to United States newspapers published between 1836 and 1922. NEH awards support state projects to select and digitize historically significant titles that are aggregated and permanently maintained by the Library of Congress. As part of the project, the Ohio Historical Society contributed 100,000 newspaper pages to the project over a two year period ending June 2010 and will contribute an additional 100,000 pages by the end of August 2012.